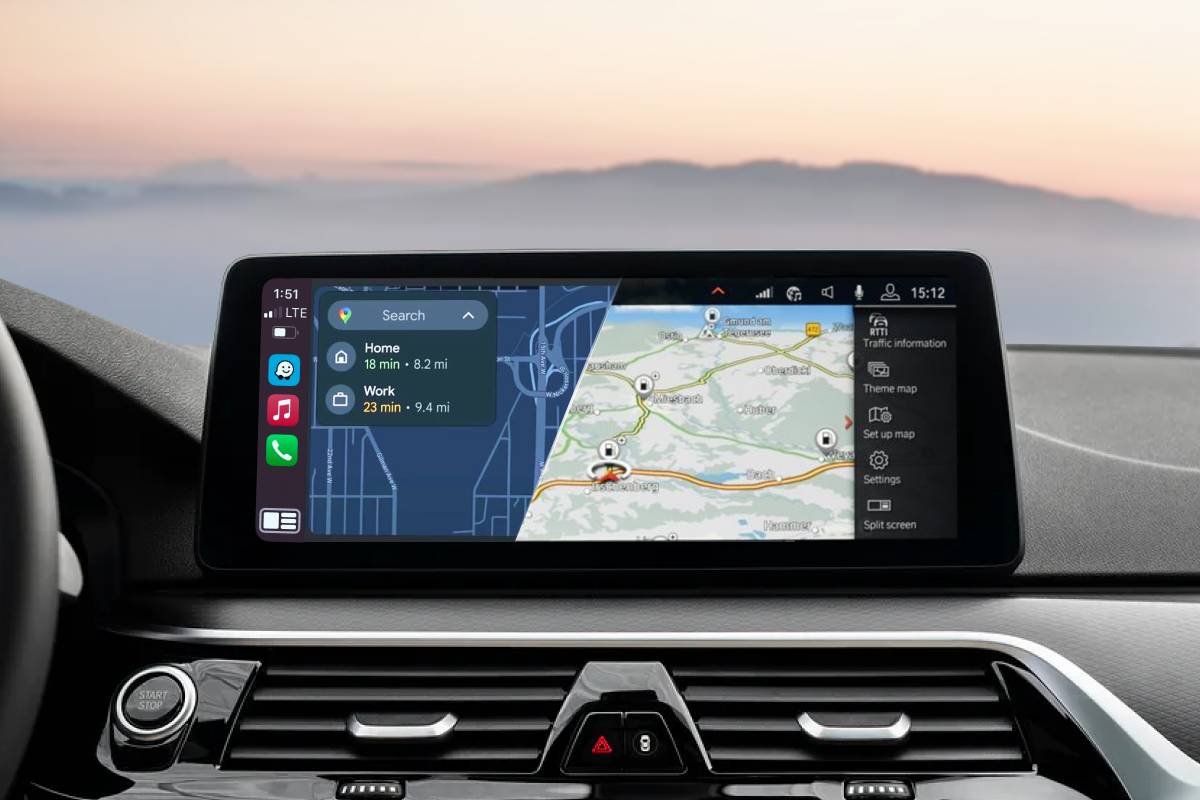 As many drivers, as many opinions. While streaming Apple CarPlay’s Google Maps from the iPhone is for many the most convenient choice, faithful fans of the BMW navigation could argue the OEM nav beats it hands down in terms of car integration possibilities.

There are many factors making a great nav, so which one is objectively better? The decision’s on you as we’ll discuss the pros and cons of both original BMW maps and Apple CarPlay Google Maps.

BMW maps came a long way since their first 2D DVD release for E-Series BMWs, so to make this comparison fair, this overview will refer to one of its latest 2019+ versions.

But how much of this is BMW exclusive and how much do you get with simply connecting your iPhone to the iDrive? Here’s a brief overview.

iDrive 7.0 has undoubtedly uncovered huge potential in the BMW iDrive navigation system with regards to phone integration, remote map control or machine learning based forecasts making up for its once greatest shortcomings. You could say it exceeded Google’s abilities to make your road trips and parking easier, which was not the case with earlier versions. Agile real time traffic rerouting was only an example of Google scoring 1:0 against BMW’s delaying nav updates during high traffic.

Does it mean that pre-iDrive 7.0 BMW maps aren’t as good and as intuitive as Google Maps? We wouldn’t be so quick to judge that. Both BMW navigation and Apple CarPlay Google Maps have undeniable pros and cons despite their generation, so the question here is – what are your personal MUST-haves? 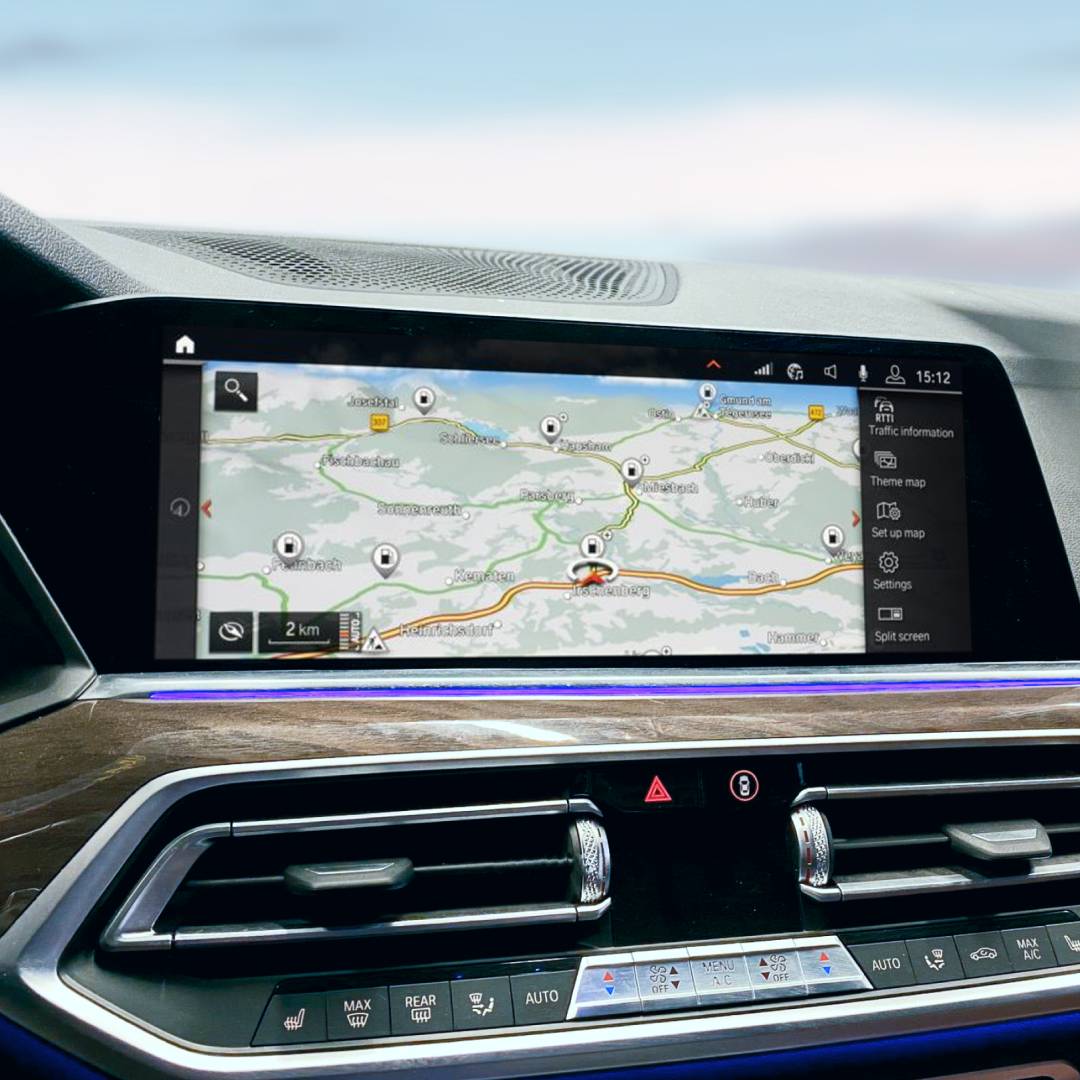 If you count on:

then BMW maps are the preferred choice for you.

Long distance cruisers will appreciate the possibility to drive with their BMW maps always on despite the status of the internet connection or mobile data. Since using BMW maps doesn’t require any of these, you’re freed from having your iPhone’s battery always charged or downloading Google Maps regions for offline usage. Moreover, with an annually performed BMW map update you can rest assured your routes and points of interest will be kept up-to-date just as they would with Google’s navigation.

And of course, there’s the drivers’ favorite – head up display compatibility. If you’re looking for safe and comfortable map solutions allowing you to have the directions right before your eyes, BMW maps are an obvious pick. Whether your car was made in 2004 or 2020, BMW maps are always adapted to your BMW head up display, so you can easily keep up with turn by turn directions or your current speed without taking your eyes off the road. As many drivers using the BMW HUD can say, once you try it you can’t go without it – even if that means sacrificing convenient Google Maps features, like sharing your current location to your friends or spot on rerouting function.

Speaking of rerouting, BMW has joined forces with HERE Technologies, a leader in the navigation solutions, and introduced HERE Predictive Routing to the BMW Operating System 8.

This means the OEM BMW maps in the newest iDrive system are able to learn your routes and destinations when in online status, and then create patterns generating predictions for upcoming journeys. Based on factors, such as traffic conditions, the destination you’re usually using and the typical departure time, it guesses where you want to go and proposes both the best routes and a more accurate departure time.

How to update BMW navigation?

So how to do a BMW navigation maps update? Since the latest vehicles store the map data on an internal hard drive you can either update them automatically over-the-air (in case of iDrive 7.0) or by performing a BMW map update download and manually saving the data on your iDrive. The latter will be the choice for cars equipped with ENAVEVO, CIC, NBT, NBT Evo, and other head units and can easily be done with BimmerTech’s BMW map update.

The process is simple: 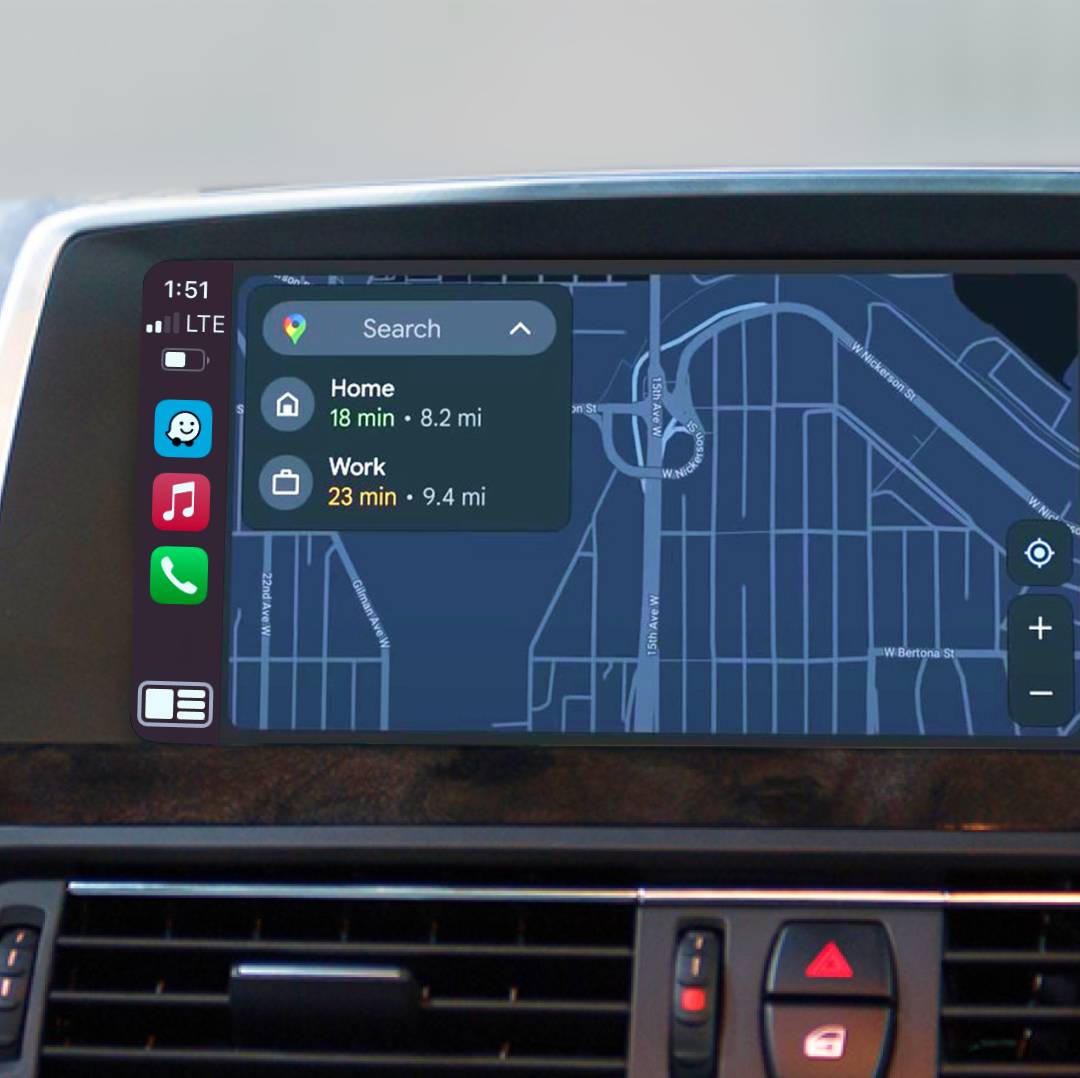 are the ones you can’t drive without, go for Apple CarPlay Google Maps.

They’ll perform at their best with available cell service in cities and suburbs where you need high reactivity to real time situations. Even though BMW improved the RTTI function over the years, many drivers with older generation iDrive systems find it slightly lagging behind when in dense traffic.

Google Maps has also developed an impressive database when it comes to points of interest (such as restaurants, malls, petrol stations) and their crowdsourced information, including reviews, photos, opening hours, number of visitors, etc. So whenever you’re in search of accurate and in-depth info, Apple CarPlay’s Google Maps will provide you with the most recent data. Turn on the Apple CarPlay Google Maps satellite view and there’s no way you’ll miss your spot.

And if you need to find a route real quick before leaving your home, just set up your destination on your iPhone (you can also pick it from the Google Calendar event you’ve created). It’ll appear automatically on your iDrive screen as Apple CarPlay Google Maps gets activated. It’s also something you can’t do on regular BMW maps, unless you’re equipped with iDrive 7 and My BMW App. In case you are, use the send maps to BMW function in your My BMW App. This will allow you to set up your navigation directions in your OEM maps remotely and quickly start off to work going the fastest route.

How to update Google Maps on CarPlay?

The best part about BMW Apple CarPlay is that it’s tightly tied with your iPhone and its iOS version, so any updates made to your iOS system, from cosmetic changes to new functions, will appear on your CarPlay hub. This means if you want to get the latest version of Google Maps, just make sure your iOS is kept updated, as opposed to getting a separate software download.

Other navigation apps on iDrive Screen

Google Maps is certainly the most robust map out of all third party map apps thanks to Google's evergrowing crowdsourced database. It doesn’t mean though other apps like TomTom Go, RoadTrippers, Apple Maps or Waze are no good and we should exclude them from the popular maps lineup. Quite frankly the latter two seem to be even more common among iOS users.

How do they compare to the OEM BMW navigation system or Apple CarPlay Google Maps?

The main benefits of Apple Maps are: 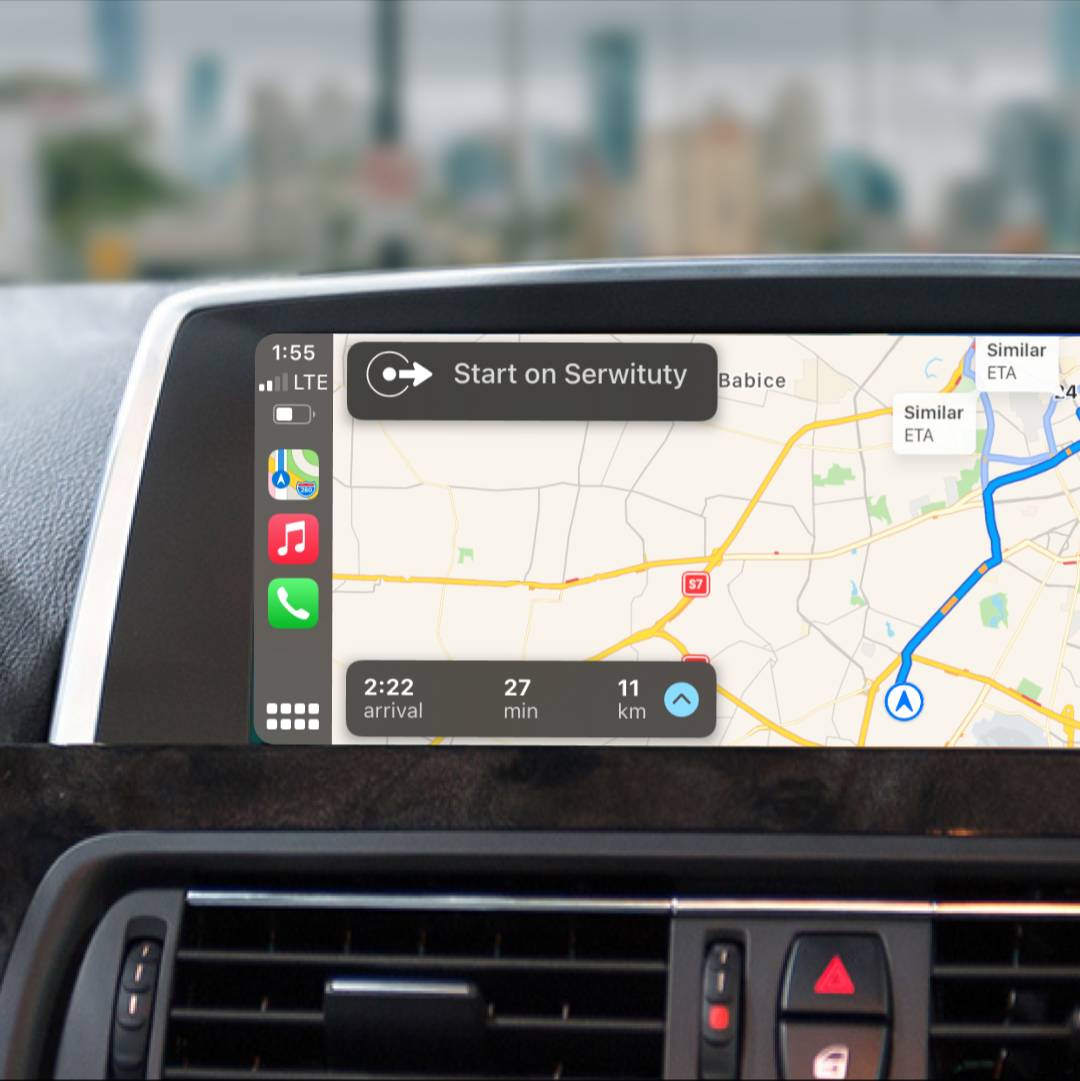 If you want your CarPlay maps to be shown in a simple layout, be well integrated with your entire iDrive system and keep your trips anonymous, Apple Maps will deliver that for you.

They appear by default in your BMW navigation system right after turning on CarPlay and are the only maps in the iOS hub to be displayed in the HUD – unlike Google Maps, which require Android Auto activation for HUD compatibility. Also, Apple’s Maps layout is simpler and cleaner compared to Google’s. Its default view is kept less busy with muted tones used for the background and irrelevant roads, and your route being highlighted with distinct blue to help it stand out.

Another benefit – data protection. If you care about staying anonymous you can be sure Apple Maps will store your personal data on your device, as opposed to on a remote server, and you can delete them whenever you want. How come? Using the fuzzing method Apple Maps fires off a few requests masking the track you’re taking. Before that data reaches a remote server it’s already disattached from your Apple ID, ensuring complete anonymity. 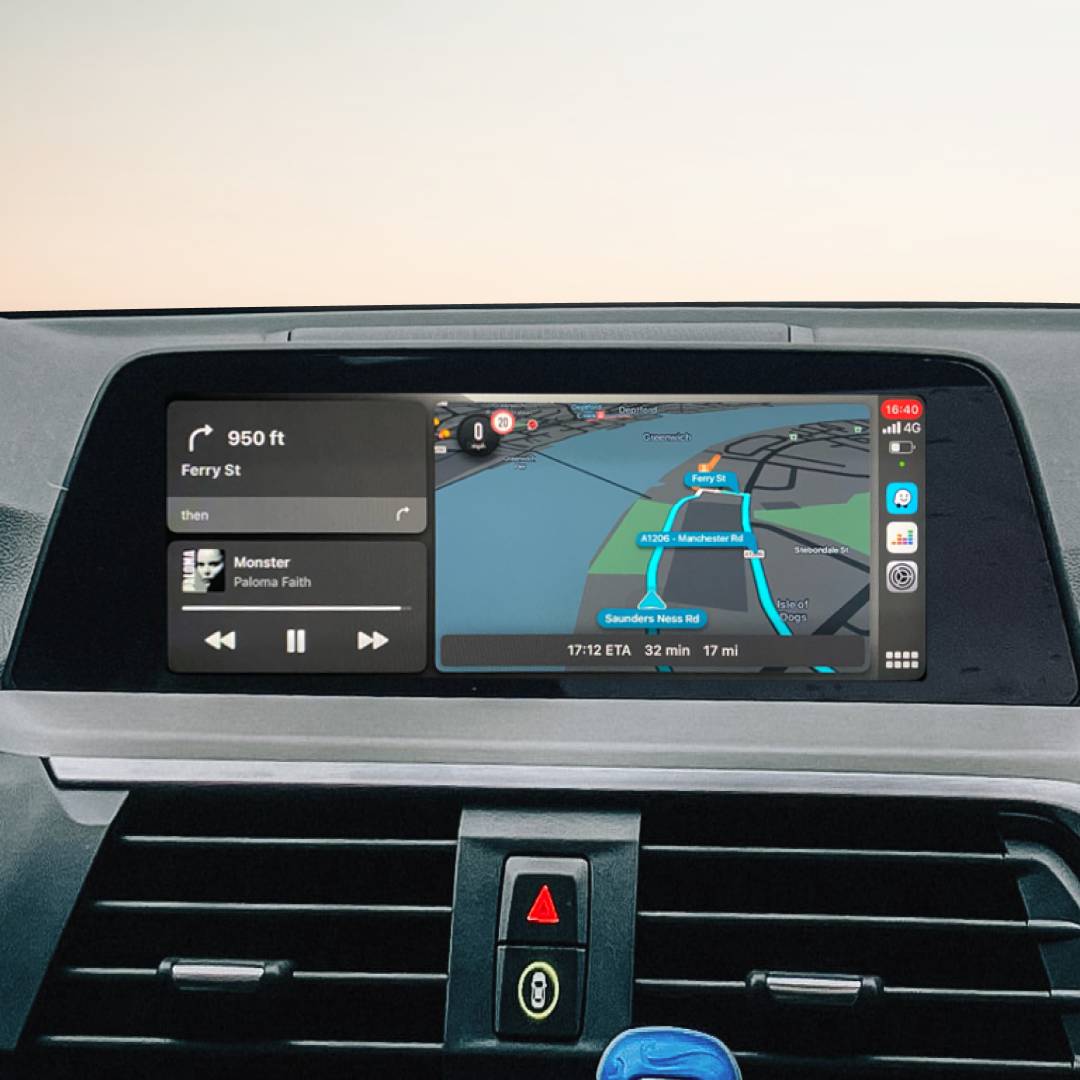 Now, if you care for:

then you might want to consider Waze as your go to CarPlay map.

The main thing about Waze is it’s a community driven app, so it’s reliant on other active users on the road who alert drivers on police patrols, potholes, construction, car accidents and other driving impediments. It can save you from getting stuck in traffic or getting a ticket, yet having it outside the city where you’re the only one user, won’t provide you much response to what’s coming up ahead.

So which driving app is better? The honest answer is there are no worse or better BMW navigations – it all depends how you want to use them. If you care for relevance and spot on BMW integration, go for BMW maps; if for plentiful data and quick rerouting, choose Google Maps; should you prefer a clean layout and displaying directions on the HUD while in CarPlay mode, pick Apple Maps; and if you’re most scared of catching a ticket or a flat tire on road debris, there’s no better savior than the Waze’s community. List your priorities and choose your own personal favorite.

Do you already have one? Let us know in the comments down below!