How to Retrofit Android Auto into Your BMW in 2022

Android Auto was launched in 2015 and the first vehicle manufacturer to offer it as a factory package was Hyundai. Right now it’s available in more than 500 models of different car makes either as a standard feature or an optional extra.

Android Auto is a mobile app that allows using your favorite smartphone applications on the car’s display. Once you connect an Android device to the vehicle, the car’s screen serves as a display for the Android Auto app, adapted to the vehicle’s user interface. This way you don’t need to engage with your smartphone to start the navigation, turn on the music or make a call. 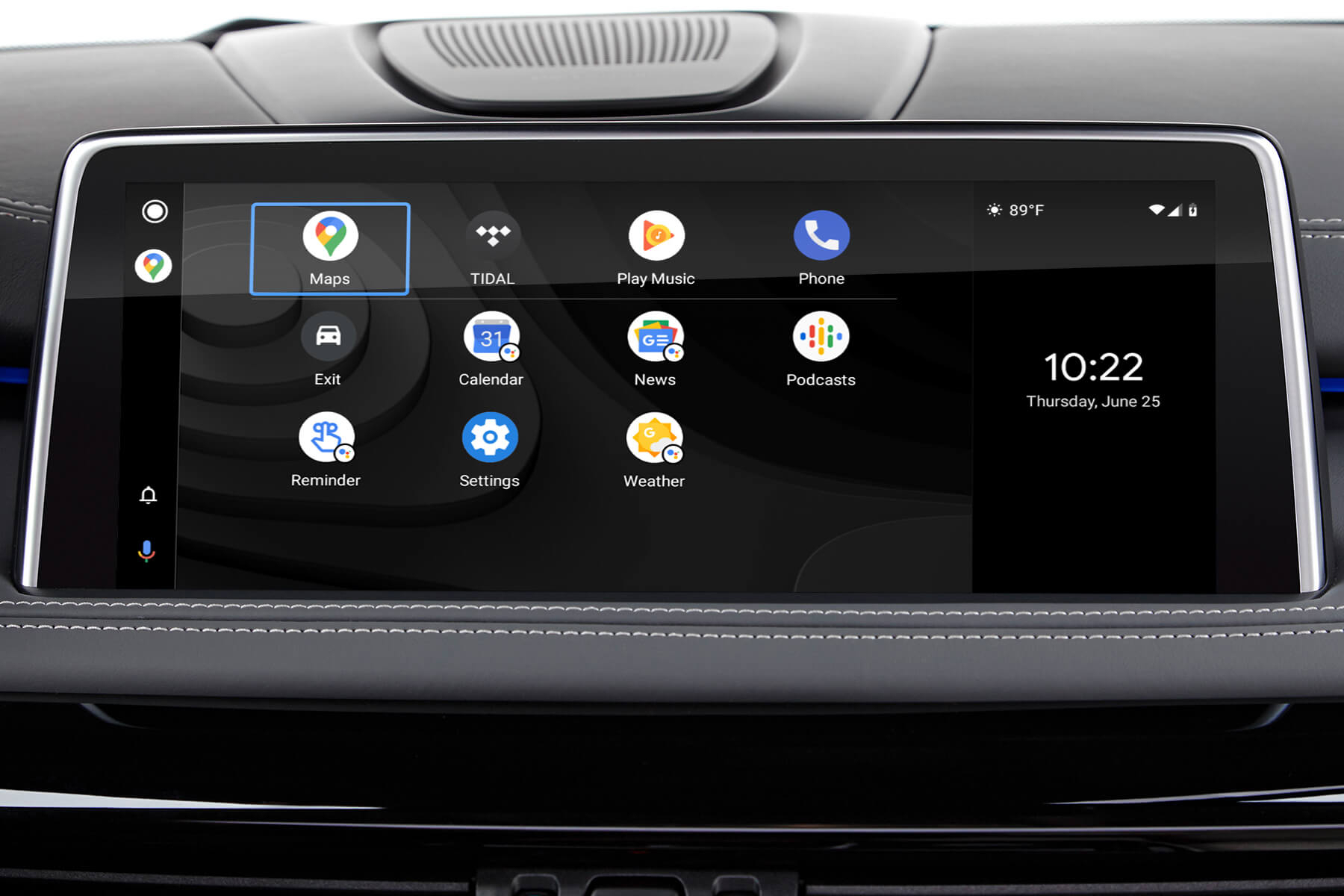 Does BMW Have Android Auto as a Native iDrive Option?

Right now, Android Auto is supported by 47 car makes. Earlier BMW didn’t even plan to be among them, but in December 2019 the automaker revealed its intention to install Android Auto on BMW models of the newest generation. The first cars with Android Auto will see the light of day in July 2020. Only the 2019/2020 BMW models with the latest iDrive 7.0 will be equipped with this integration. To learn more about the original software, read our blog post on what Android Auto is and how it works.

If you’re after genuine BMW solutions only, among scarce ways of integrating an Android device with a BMW you will find the BMW Connected app (which strongly depends on your phone and car model meaning connectivity issues and bugs are inevitable), Bluetooth and few others.

If you really want to get Android Auto in BMW without installing any aftermarket hardware upgrades, you can run the app on your smartphone and mirror it onto the iDrive screen.

HOW DO I GET ANDROID AUTO IN MY BMW?

When it comes to the native iDrive & Android Auto integration, BMW vehicles can be upgraded with Android hub 2 ways – via OEM Android Auto activation or aftermarket Android Auto retrofit. If your BMW was produced after 2019 and has iDrive 7.0 then the 1st option would be an obvious choice. A simple 30-min remote coding session is all it takes to activate the option implemented from the factory in your iDrive and start using your favorite Android apps.

For vehicles with older generation head units such as NBT Evo ID5/6, NBT or CIC there is another possibility of upgrading Android Auto – a BimmerTech original Android Auto MMI Prime. How is it different from other aftermarket solutions?

How to Install Android Auto in BMW?

Android Auto MMI Prime is a hardware upgrade that includes only an MMI and wiring harness. The kit is completely plug & play and its installation differs depending on the head unit version. The installation for NBT-type head units takes 1–2h (the exact time depends on each model). You don’t need to have any professional expertise or prior experience to fit the Android Auto BMW retrofit — you will get detailed installation instructions for your specific BMW and will be able to get in touch with BimmerTech support to guide you through any stage of the process.

BimmerTech's Android Auto MMI Prime supports wireless connection just like the original software, but the list of officially compatible phones covers only Google's Pixel and Nexus lines, and Samsung Galaxy phones with Android 8.0 or higher, plus other phones running Android 11.0. Check out the full list below:

Keep in mind that other phones may work too, even though they are not officially compatible.

It is also recommended to install or update the Android Auto app to version 4.7, as well as using a high-quality original USB cable for the initial setup.

Before purchasing the Android Auto MMI Prime it’s necessary to check whether your smartphone is compatible with the application.

In order to see your Android version, go to the Settings and then to the About Device section.

Why Android Auto is not available in all countries

Unfortunately, BMW Android Auto is limited regionally. Currently it’s available in 36 countries — you can find the full list here. But if you check out the Google Play store and it’s not there, probably your location isn’t on the list. In this case you can do a quick workaround — download the Android Auto .apk file from an alternative source on the web or use a VPN to change your region and download it from the Google Play Store.

How do I connect to Android Auto?

To enjoy Android Auto wirelessly your phone has to support wireless Android Auto. Once you pair it wirelessly, your phone will automatically connect with the MMI every time you get into your BMW, without you even having to remove your phone from your pocket or bag.

In order to launch Android Auto via cable, you need to connect your Android device to the car by plugging a USB cable into the separate USB socket provided in the Android Auto MMI Prime kit. You can fit it in any suitable place, so that it's comfortable for you to keep the smartphone connected.

There is no need to keep the Android Auto app open on your smartphone. In fact, your Android device can be operated independently, apart from calls  which will go through the BMW system.

How to Use Android Auto in BMW?

Android Auto MMI Prime operates the same way as the original software is intended to, but it’s integrated with the BMW iDrive system, which doesn't have any native support for Android Auto, so it works differently than in other cars with Android Auto.

There are 3 ways to navigate the menu on the iDrive native screen:

You can use Google Assistant to do a lot of things without you taking your eyes off the road. Using simple commands like “Start Spotify” or “Take me home,” you can easily operate Android Auto while safely driving your car. You can give even more specific tasks, like asking Google Assistant to turn on a specific song or find restaurants around your area. Just make sure you have steady Internet connection for the Google Assistant to work properly. To toggle back and forth between your BMW's iDrive menu and the MMI/Android Auto view, press and hold the iDrive controller Menu button.

Why Android Auto MMI Prime Is Better than Other Retrofits

Apart from integration with the native BMW system and providing Android Auto functionality, the retrofit also has: “Can Android Auto mirror the screen of my phone?” is a frequently asked question, and unfortunately, Android Auto doesn’t support screen casting. But Android Auto MMI Prime has a custom solution - the Android Autolink app. You just need to plug your mobile device into a USB socket, choose the app in the menu and your phone’s screen will be mirrored onto the iDrive display. It means that you’ll be able to stream YouTube for your passengers or other apps not available in Android Auto mode. You likely won’t be able to cast Netflix though, because the service blocks mirroring.

A USB cable with a user-facing female socket (included into the kit) is used to connect the smartphone to the iDrive and use Android Auto while also charging the device. But it can also be used to play videos from a USB stick in a full-screen mode.

Android Auto MMI Prime is based on an original BimmerTech multimedia module (MMI) that ensures the connection between the external software and the native BMW system. It also has inputs for either front, or rear, or both cameras, which means that you don’t need to buy cameras with a separate MMI. Because you already have it in your Android Auto retrofit. 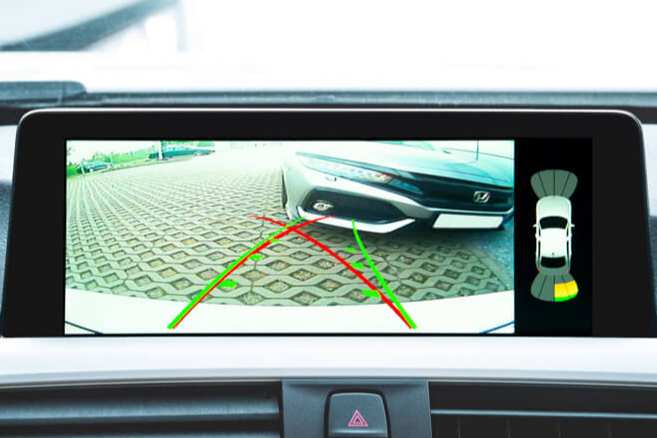 This is a perfect solution when some of your family members or friends have iPhones while you’re an Android user. If you want to know more about CarPlay, read our blog post.

The main advantage of Android Auto over, say, CarPlay, is that it has much more apps available. In fact, you can use: 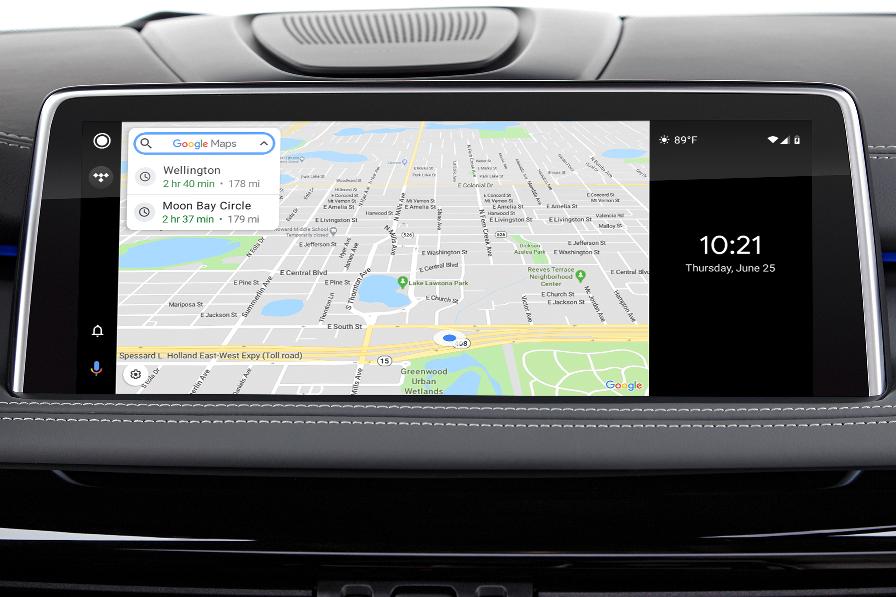 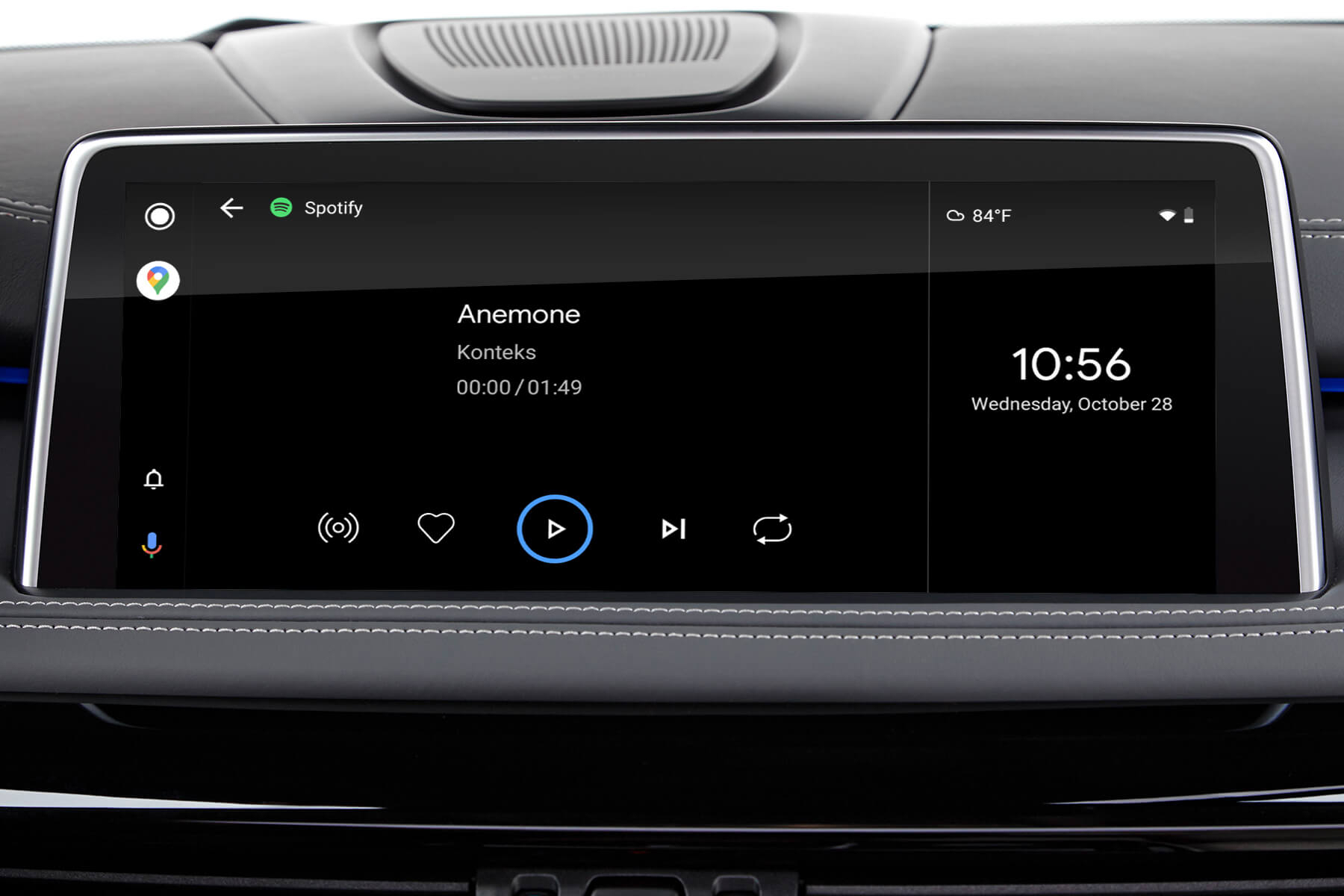 During I/O 2019, Google announced an update to Android Auto, and in July it successfully rolled it out to the masses. Since then, it's gone through many changes.

The first thing anyone will notice is a dark theme which instils some elegance to the overall look. With the new user interface, it completely changes the experience of using Android Auto. 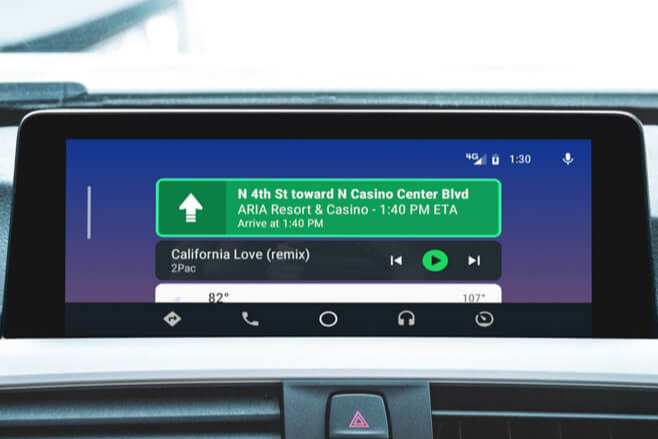 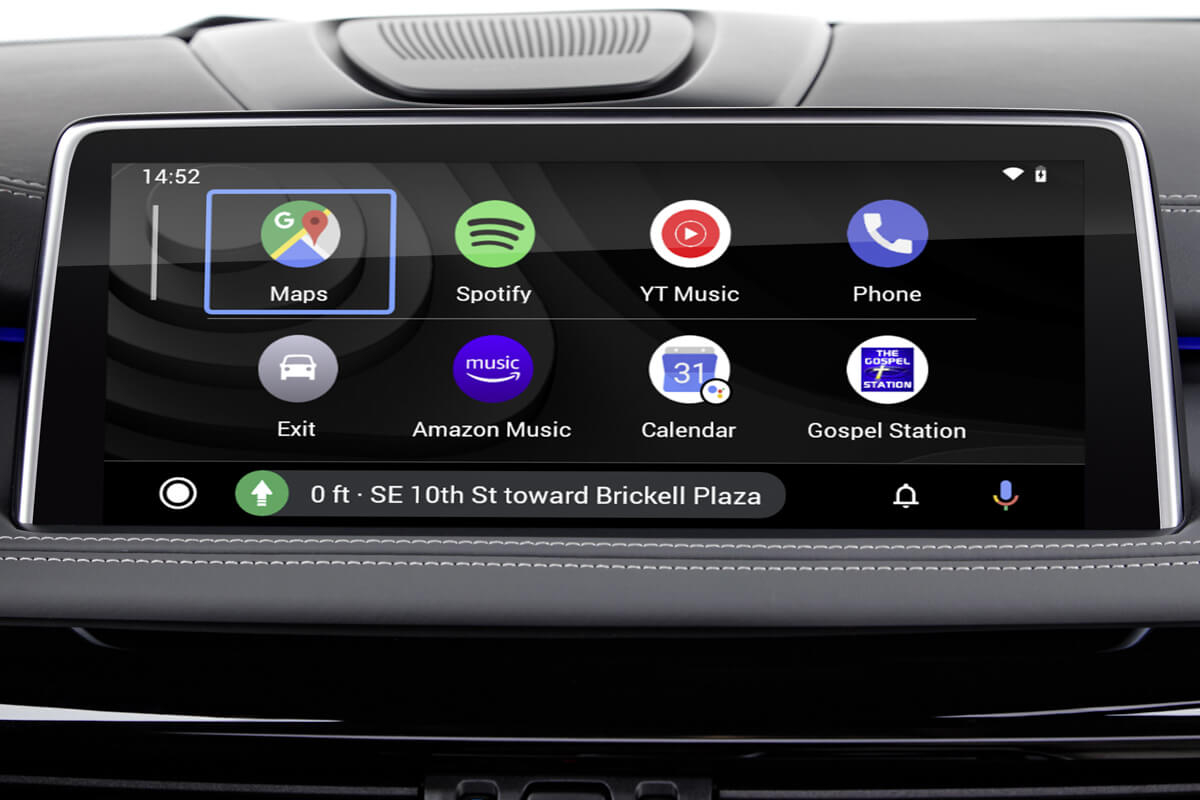 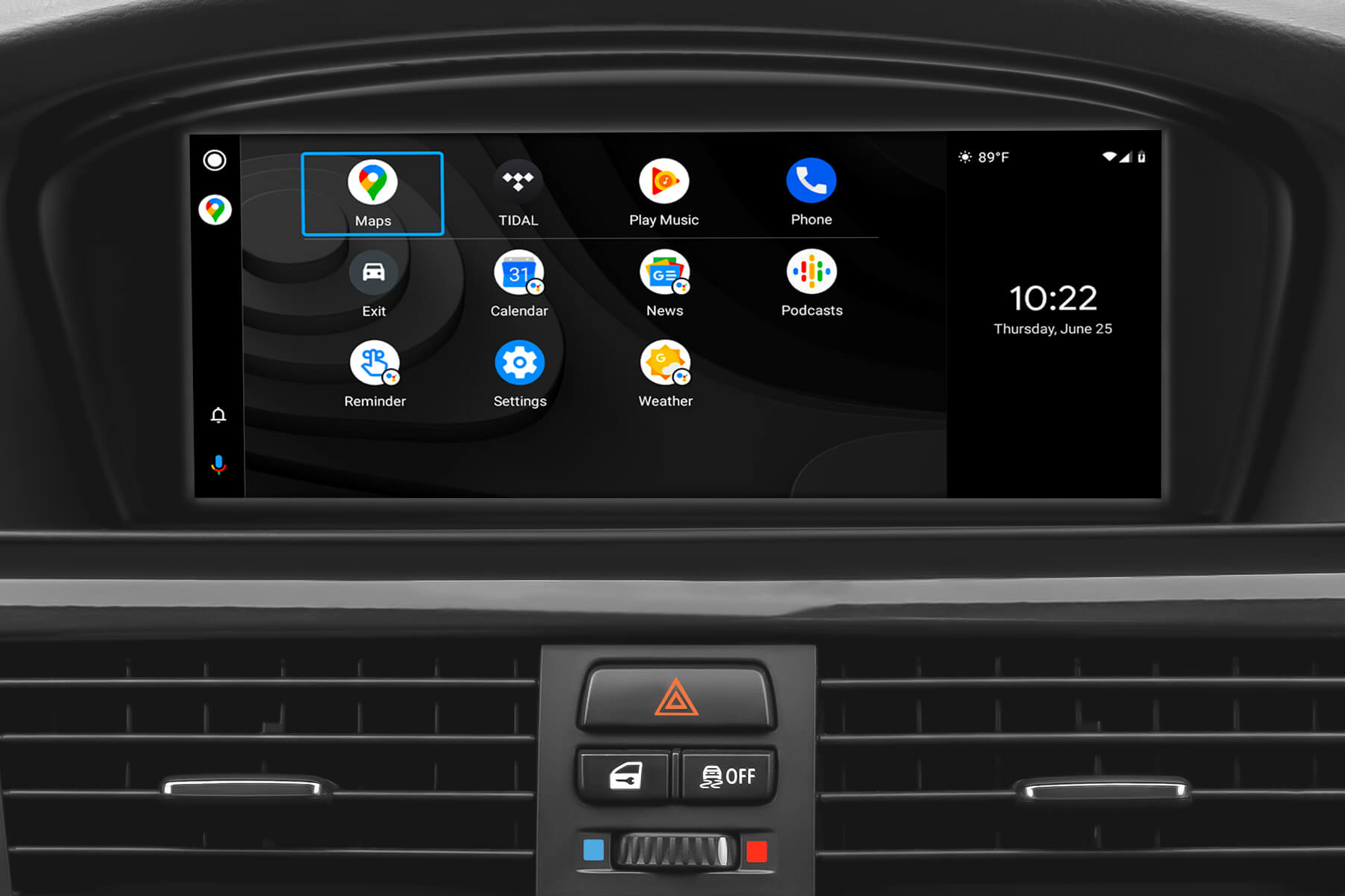 The app launcher on the start screen shows the most recently used apps for easy and quick access, and the rest is below, right away on the first screen. Unlike the previous arrangement, this is much more comfortable because you don't need to do a lot of unnecessary clicks/moves. What's more, when you launch Android Auto after using it, the auto launcher brings up the last used app.

As you can see from the photo, they have a Google Assistant icon featured on the screen. So, when you click on it, Google Assistant will tell you about the latest news, weather situation or calendar events/reminders for a specific day.

Among other new things, there is also a separate notification button where you can go and ask Google Assistant to read everything you have missed.

Is there Android Auto with a Wireless Charger?

Android Auto MMI Prime doesn’t include wireless charging functionality. However, there is a Wireless Charger for 3-series F30 models that can be purchased separately. Before buying it, make sure your smartphone supports the feature.

Why Has BMW Decided to Have Android Auto as Original Software?

Thousands of BMW owners were disappointed with not being able to use Android phones in their favorite vehicles. BMW claimed earlier that Android Auto was not secure enough in terms of user privacy. There’ve been also rumors that it’s just hard to implement and doesn’t have such integration flexibility like, say, CarPlay. But given the fact that so many car makes have incorporated the software, plus thousands of BMW owners with Android phones, the new BMW CEO has finally decided to give way to Android Auto software.

However, the decision to include Android Auto only into the newest models with the latest iDrive doesn’t actually solve the problems of the majority of BMW drivers. That’s why questions like “Can I reprogram my BMW to use Android Auto?” or “How to hack Android Auto?” continue to flood the web.

Will BMW ever incorporate Android Auto into 2018 and older models? Highly unlikely. What we do know is that you don’t have to look for BMW iDrive hacks or wait for ages till the software makes its way to your favorite car.  BimmerTech Android Auto MMI Prime is here to stay, and you can start enjoying it now.