How easy is it to get your BMW playing nicely with your Android phone?

Well, it's an Apple world — if you drive a BMW, at least. From Siri and CarPlay integration with the iDrive to BMW ConnectedDrive features unique to iOS, the Bavarians have gone out of their way to make iPhone-users feel at home in their cars. But what if you're on Team Google? The kind of person with the latest Android phone and a smart home controlled by a small army of Google Home speakers, and you're only looking to bring all that Googley goodness into your BMW? 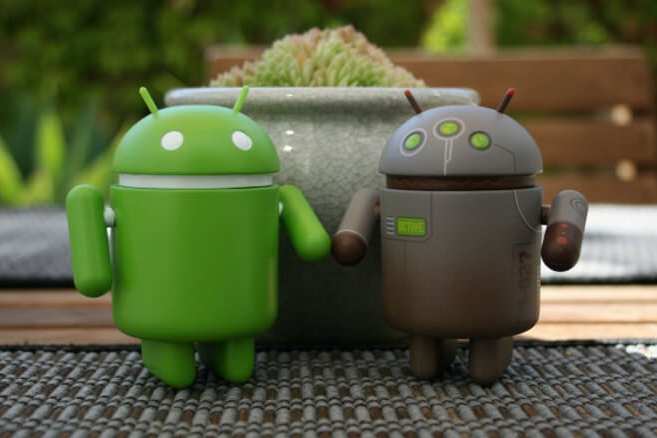 Unfortunately, BMW doesn't promise Android-users the same smooth experience anybody with an iPhone might be used to. For BMW, Android integration seems like an afterthought. Some features — like BMW Apps and the M Laptimer — are either unavailable or lagging well behind iOS in the corresponding Android BMW apps.

All is not lost, though. Third-party companies such as BimmerTech have worked hard to take up the slack, meaning you've still got plenty of options. Depending on your smartphone and other hardware, some might even be a little bit better than anything your iOS-toting friends are going to get. So let’s take a look at a few ways to get your BMW and Android phone on the same page.

As it stands, BMW is one of the few major carmakers that doesn't offer Android Auto in any of its vehicles. That's set to change in July 2020, though, so it isn't too early to find out what Android Auto is. Until then, is it possible to retrofit Android Auto in a BMW? Yes. Should you? Of course, as long as you go the right way about it. 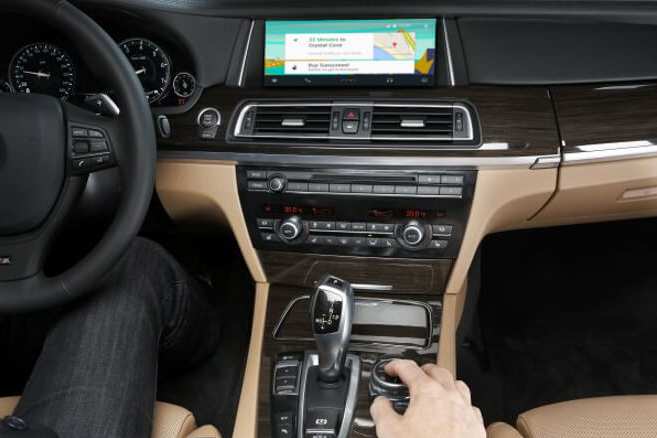 Most aftermarket Android Auto units by brands like Kenwood and Pioneer are designed to replace your vehicle's factory hardware, by slipping into the dashboard in place of some of all of your existing stereo. These are one-size-fits-all solutions, though, so the device isn't going to be optimized for your BMW. Even worse, it could mean giving up some or all of the factory iDrive capabilities to accommodate Android Auto.

So what options do you have?

How do I get Android Auto in my BMW?

A BMW-specific Android Auto retrofit, like BimmerTech's Android Auto MMI Prime, can be a great way to solve the problem. These kits are designed to integrate with your BMW's factory iDrive system, meaning you can use Android Auto on the stock dashboard display, and control it just like BMW's native infotainment system, with the knobs and buttons you're used to, as well as via Google Assistant voice control. It's even possible to use the dashboard controls to alternate between Android Auto and iDrive, meaning you don't need to give up what's great about iDrive to use Android Auto.

Find out more about retrofitting Android Auto MMI Prime in your BMW.

Compatibility with these Android Auto retrofits will depend on your vehicle, so enter your VIN at the top of the page to find out what we can do for your BMW.

What are the alternatives?

If your BMW isn't compatible with an integrated Android Auto upgrade, an alternative solution is using the Android Auto app on your phone and casting it to the iDrive. BMW offers Android Screen Mirroring in some of its latest cars, which can be activated in compatible vehicles through a simple USB coding procedure. Owners of other vehicles can start mirroring Android to the BMW iDrive with BimmerTech's SmartView HD Flex. The kit lets you replicate your Android device's screen on iDrive display, meaning you'll have the driver-friendly Android Auto interface conveniently located on the dashboard. As a wireless solution, it solves the problem of messy cables and phone brackets cluttering up your interior. The downside is that you won't be able to use your dashboard controls to navigate through Android Auto, instead having to rely on voice or your phone's touchscreen.

If you're feeling a little more adventurous, it's even possible to hack a custom solution around an embedded Android device. Many devices cable of running Android — whether that's a single-board computer like an Odroid, or just your old smartphone — can run the Android Auto app, meaning you only need to find a way to keep it powered in your car and output the display to the iDrive screen. Several BimmerTech kits are based around our Multimedia Interface (MMI) which is responsible for linking aftermarket audio-video devices to the iDrive system. Depending on your kit, your MMI may include an additional HDMI input which can be activated using the factory iDrive controller, making it possible to connect your homespun Android Auto device to the iDrive. We at BimmerTech are always happy to help imaginative people expand their retrofit kits with added features.

Again, the downside to these non-integrated solutions is that they do not allow interacting with Android Auto through touch, even (as of yet) in newer vehicles equipped with a touchscreen. That means relying entirely on voice commands, something which may be second nature to anybody embedded in the Google ecosystem, but it still likely to cause a few headaches.

On Android, BMW Connected might not have all the same features you'd find on an iPhone, but it still technically exists. Owners of BMWs made after 2014 can find the BMW Connected Android app for download on the Google Play Store.

A glance at the reviews should be a clue that it isn't all easy sailing, and depending on your vehicle and device you might come across all sorts of bugs and connectivity issues. Get it working, though, and you'll have plenty of ways to interact with your BMW through your Android device.

The most reliable and useful feature is remotely checking in on your BMW, to confirm its doors are locked or locate it if you've lost track of your parking spot.

If you can tolerate the BMW navigation system, you can also use the app to send destinations from your Android phone to your vehicle's iDrive system, perfect when you don't want to try to enter the address with the iDrive controller. BMW also promises the ability to schedule trips and get alerts when to leave based on local traffic conditions. Honestly, though, you'd probably be better relying on Waze for that. 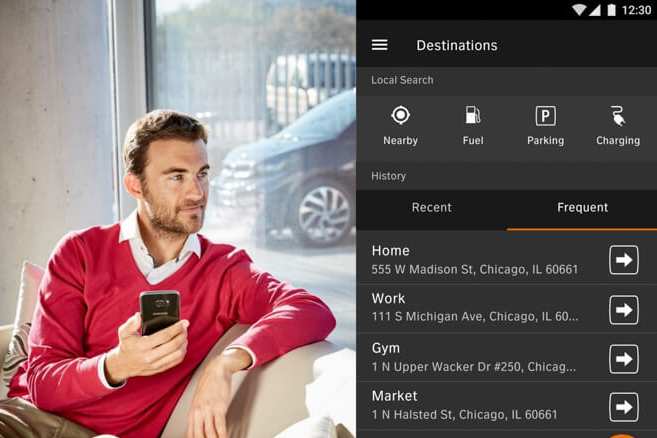 One well-known disadvantage of Android is the more fragmented ecosystem, which can make it difficult to maintain compatibility between devices. Bluetooth is one area where that plays out; different devices support different Bluetooth versions and codecs, which could mean a device that works with one Android phone won't work with another, or will work differently.

The flip side is the relative openness of the Android system, as Google has put fewer restrictions on what third-party apps and devices can do with the user's permission. This means that after navigating any potential connectivity issues, you might find yourself being able to do more with your phone. Comparing a Samsung and Apple flagship phone, you often find it's the former that will be able to do more through the iDrive after establishing a Bluetooth connection. Sending emails or viewing SMS, for example, can be problematic with an iPhone, but Android users are likely to be able to access all this information through their BMW's interface.

As Bluetooth capability depends both on your vehicle and smartphone, you should check exactly what features you can expect to be able to take advantage of on BMW's website.

BMW includes support for all the major voice assistants: Apple's Siri, Alexa from Amazon and Google Assistant. What that support actually translates to, though, differs between the three. 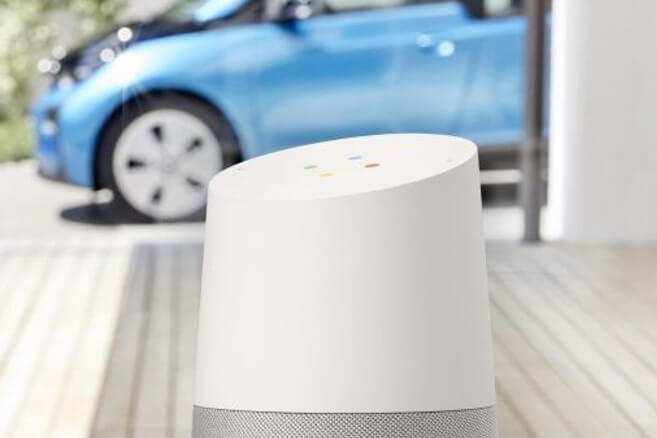 The first thing to make clear is that BMW remains committed to producing its own voice assistant for use in its cars. That means it could be a long time until Google Assistant is able to handle everything you can do through BMW's voice commands, such as changing the FM radio station or adjusting the native navigation. Then again, if you're committed to streaming music and third-party navigation options like Google Maps, that might not matter.

So what can you do with Google Assistant? Largely the same as you can already do through the BMW Connected app. After connecting your Google and BMW Connected accounts, you'll be able to ask Google Assistant to check your BMW's doors are locked, set the climate control before you're ready to leave or send destinations to your navigation system.

Unlike Siri — which can be called while driving by long-pressing the voice command button on the steering wheel in compatible vehicles — Google Assistant is more suited to using outside your car, by speaking to your Google Home speaker. By the time you're behind the wheel, your options are limited, but you'll still be able to access Google Assistant by "Hey, Google"-ing at your Android smartphone. Assuming it's streaming audio through your car stereo over Bluetooth, the experience won't be too different from an actual, built-in solution. Just remember you won't have any voice control over your BMW.

That's the rub. Using an Android phone with your BMW can sometimes be a little frustrating, and you might have to make a few sacrifices here and there. But with a little perseverance and the right hardware, you'll have a Googley BMW in no time.