BMW vs Mercedes-Benz is one of the great rivalries of the motoring world. To luxury vehicle lovers what Mitsubishi vs Subaru is to '90s rally fans, and Ferrari vs Lamborghini is to supercar-obsessed children.

Behind the scenes, though, BMW Group and Mercedes-Benz parent company Daimler look happy to team up to fight off a greater shared threat: Uber.

Though regular drivers might see ride-hailing services like Uber or Lyft as something to fall back on when you want a few drinks after work but don't want a DUI, the companies would have us believe that they post a genuine alternative to car ownership for young city types. You know, all those people who don't have kids, live in a condo four or four bus stops away from the office, order everything online and don't have anything against bicycles.

It's not hard to figure out why somebody with the right lifestyle might see public transport, self-propulsion and the occasional Uber ride as an adequate replacement for actually owning a car. 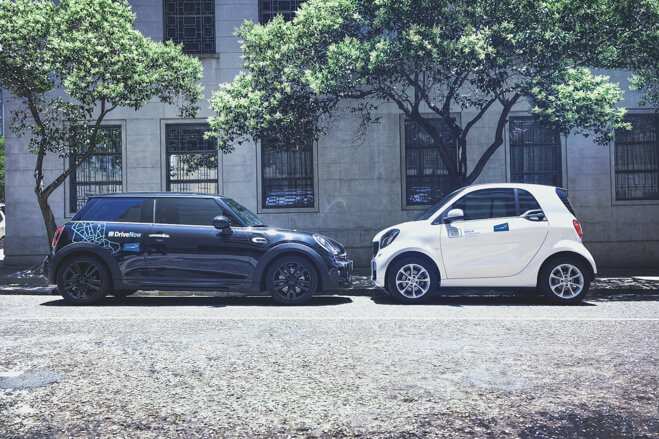 An alternative to car ownership

That's exactly the kind of possibility that's prompted car manufacturers to take action, which BMW has with its DriveNow minute-by-minute carsharing service in Europe, followed up by a similar ReachNow service in a handful of American cities. Daimler's offering, car2go, offers a similar service in cities across Europe, Asia and North America. All three are almost Uber-esque, letting you use an app to book a nearby car, pay only for the time you spend on the road, then park up wherever you want when you're done.

The three services combined have up to 4 million global users, and it isn't difficult to see the appeal. There's no need to finance purchasing a car or worrying about insurance, maintenance, depreciation and all the other things responsible car owners have to worry about. Even fuel costs are included in the rental price! And unlike with Uber, you actually get to sit behind the wheel of a BMW 1 Series or MINI Cooper, instead of the back seat of a Toyota Camry.

Now, though, a German newspaper has reported that BMW and Daimler will combine their respective carsharing services to give them a better chance of competing not only against Uber and Lyft, but alternative carsharing companies like Zipcar. It's not yet clear exactly how the merger will work, with the car2go and DriveNow brands — and presumably their members — staying separate, but the technology behind the services are going to be shared.

Who is this for?

Carsharing isn't a replacement for car ownership for anybody who puts in a lot of miles on the road, and it will take a while before it's even an option at all outside the major cities. But for people with moderate driving needs just looking for a car for a few hours every other Saturday, it's a great choice, particularly when it can also mean getting a first taste of driving a BMW or Mercedes-Benz.

If BMW and Daimler can work together to make carsharing services available to more people in more cities, we're all for it. But that doesn't mean we're ready to put the BMW vs Mercedes-Benz discussion to bed just yet.