A SmartView kit from BimmerTech lets you use iOS and Android apps on your BMW's iDrive display. But with a little imagination (and fair bit of perseverance), it can be the foundation for so much more.

Virginian BimmerTech customer and tech fanatic Greg Kashmer found a way to add iOS, Apple TV and Blu-ray functionality to his X1's factory iDrive system. And because that definitely sounds like something worth doing, we asked him to give us a step-by-step account of his journey from factory iDrive to in-car multimedia hub. I have a 2016 BMW X1 F48 that I bought new in June 2016. The vehicle has all the BMW upgrade packages minus the adjustable rear seat position option.

When I purchased the vehicle the dealer thought that my iDrive system would be able to play DVD’s, but it turns out that wasn't the case. Slightly disappointing, but this minor early letdown would later drive me to research what possibilities there were for my car.

So about a year after my BMW purchase, in the summer of 2017, I was researching ways to roll the vehicle windows up using the remote key fob. BMW lets you roll the windows down with the remote, but not up, which puzzled and frustrated me. I had installed an upgrade in my 2000 VW Beetle years ago that allowed me to do this, and wondered why I couldn’t do this with my way more modern BMW now. 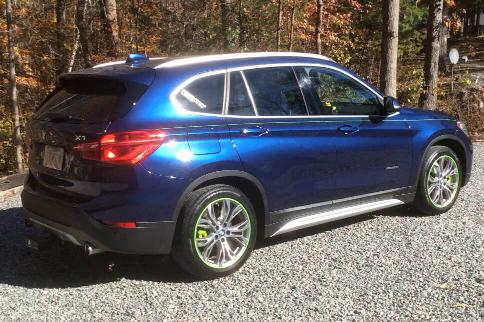 Eventually my research landed me at the BimmerTech website. BimmerTech offered coding enhancements providing the window operation I was after. I contacted BimmerTech Tech support and began my first of several communications with Nelson Louis.

There were plenty of coding options listed on the BimmerTech site besides the remote window operation I'd been looking for, two of which particularly caught my eye: ‘USB Video Player’ and ‘Video in Motion’. Getting these features unlocked would let me watch videos from my iPhone on the iDrive dashboard display, which seemed a decent alternative to the DVDs I'd hoped my iDrive would be able to play.

Unfortunately, when I entered my X1's VIN, neither of these options were available for my vehicle. When I asked Nelson why that was, he indicated that it had to do with the iDrive Navigation system installed in the vehicle. My BMW is equipped with the ‘EntryNav’ iDrive system, and a more sophisticated version of the iDrive Navigation system (like NBT Navigation) is required to code many of the other features BimmerTech offers.

At that point, I decided I would just get the coding enhancements available for my vehicle and move on.

Before committing to the coding I did some additional reading and video-watching related to other BimmerTech retrofits, one being the SmartView HD wireless mirroring kit. This seemed a good alternative to the ‘USB Video Player’ coding for getting content from my phone to the iDrive screen.

I contacted Nelson again and he said that this was available for my iDrive Navigation system. This retrofit was built around a modified Apple TV 3, so I knew the kit would give me a lot of options. The kit also included Multimedia Interface (MMI) to connect everything to my iDrive system. 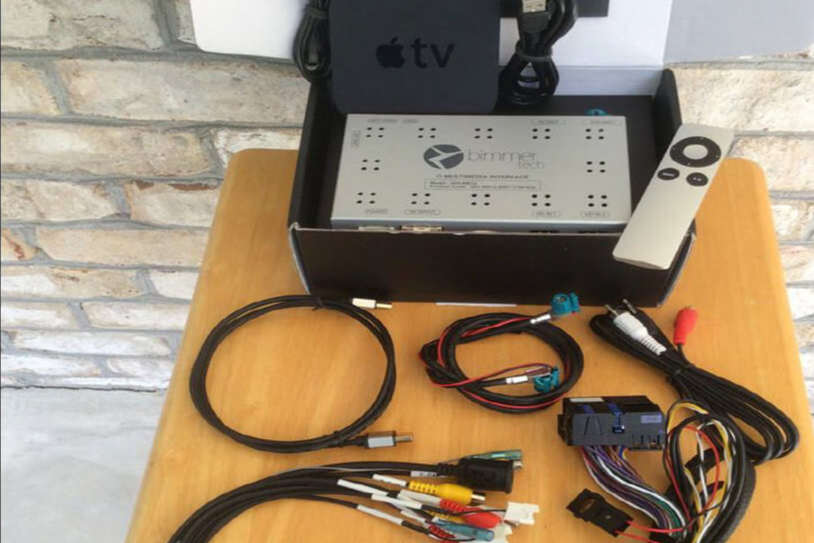 After watching the installation video, I was hesitant to tear apart my BMW dash to do this modification myself. I also tried to rationalize what benefits I would get out of having this installed. One thing that came to mind was safety. I felt that having the ability to mirror my iPhone screen to my iDrive monitor offered a way to minimize occasional phone distractions and keep my eyes pointed forward.

I also liked the ability to mirror any application on the iPhone to the monitor. As an example, Google Maps or other Navigation applications could be used as alternatives to the BMW Navigation offering and displayed on the iDrive monitor.

Not sure at this point if I wanted to tackle this task myself, I decided to check out the ‘Authorized BimmerTech Dealers’ and found an Authorized Dealer a few hours from my home. I contacted Bimmer Rescue in Richmond Virginia, and made contact with the owner almost immediately.

The owner, Patrick McHugh, called me and told me that his shop had never done a BimmerTech enhancement, but he sounded as excited about doing one as I was. He told me that he would be the Guinea pig and ordered a SmartView system to install in his vehicle. He also indicated that his shop performs coding options and could handle the coding enhancements I was interested in. 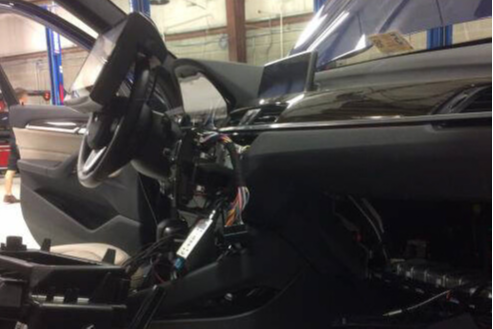 Within a few weeks, Patrick had installed his SmartView system and really liked it. We agreed upon a reasonable installation and coding price. He said to order mine and we would schedule the SmartView install and coding enhancements.

After I made the order with BimmerTech, they sent a link to the installation instructions. After reading them, I noticed that the MMI included in the kit had a second HDMI input port, in addition to the HDMI input the Apple TV unit would attach to. This set the stage for solving my earlier setback of not being able to play DVDs on my iDrive screen, and I began planning what I would need to bring to Bimmer Rescue for my BimmerTech SmartView HD install.

I wanted to make sure that, when the SmartView system was installed, I would have an HDMI cable installed in the HDMI-2 port. If I didn’t do it at the time of the SmartView installation, I may never get it installed. I provided the installer a quality 4-foot HDMI cable, and an HDMI faceplate. 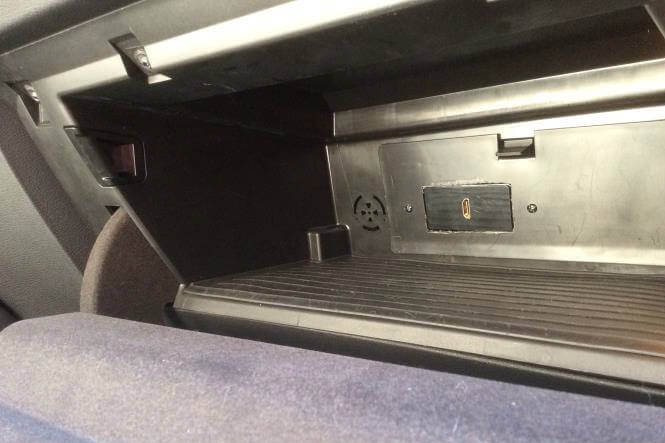 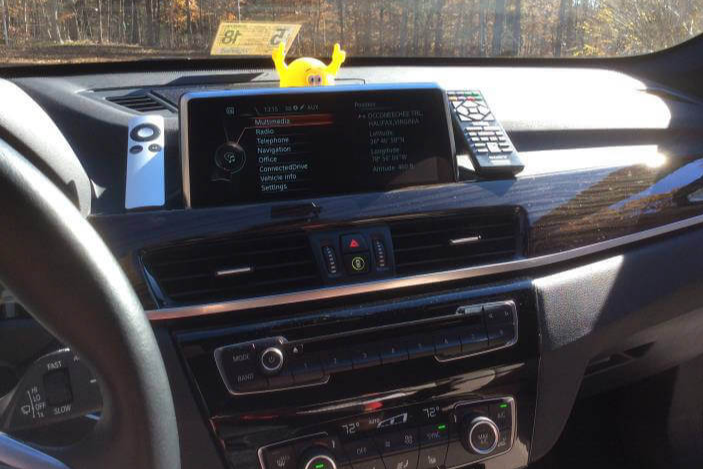 The drive home was awesome. The SmartView HD system integrates into the existing iDrive system wonderfully. I could mirror my iPhone to the Apple TV effortlessly, and after setting up the iPhone as WiFi hotspot, I could access all the Apple TV apps on the iDrive monitor. 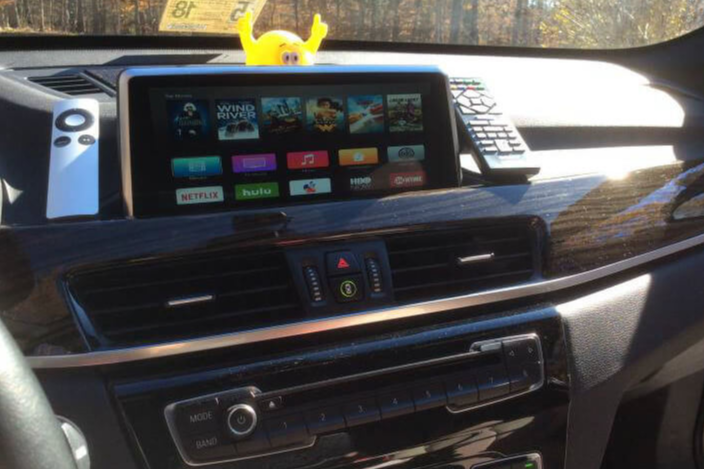 At home the following day I tested the HDMI-2 connection using a home Blu-ray player. I connected a 25-foot high quality HDMI cable to the faceplate in the glovebox and plugged it into the Blu-ray HDMI output. I powered the Blu-ray with a home extension cord and put in a movie. I swapped to the HDMI-2 input using the iDrive controller, hit play, and the video and audio played perfectly. 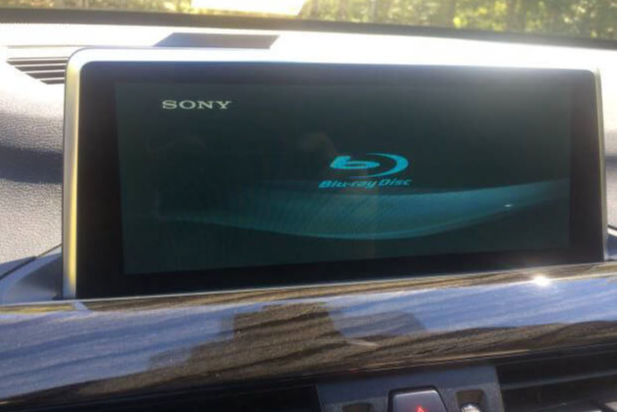 I thought at this point that the remaining tasks were going to be easy. I made plans to permanently install the Blu-ray player in my BMW's trunk, and ran the HDMI cable through the car to connect to it. 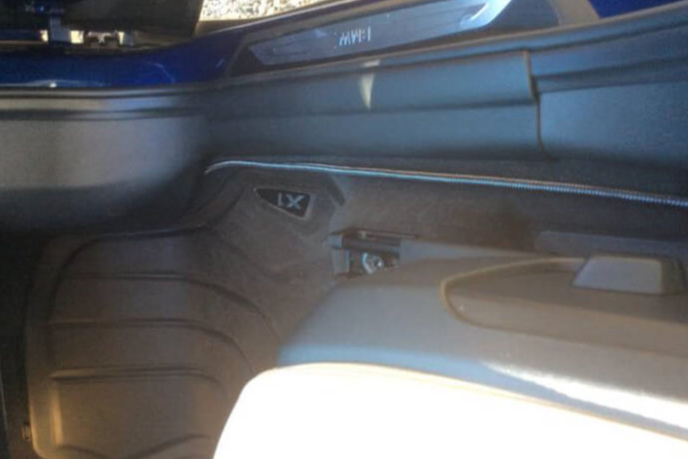 With the setup done, I then attempted to play a movie again. This time I got a SONY Startup Banner on the monitor, then a ‘No signal’ banner displayed. 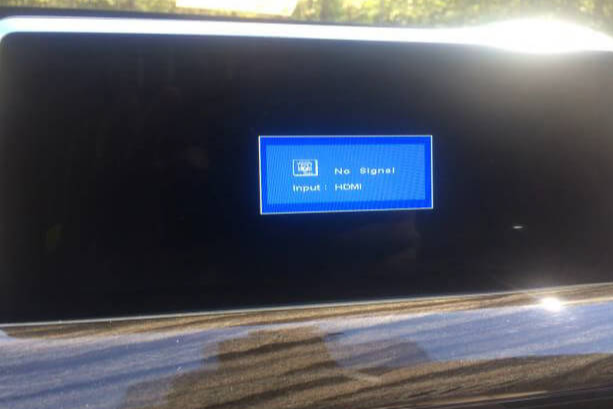 I contacted BimmerTech support who were happy to help, even though the SmartView HD kit wasn't sold with my custom Blu-ray setup in mind. We discussed the possibility of lost signal due to the cable length, but I had already ruled that out by connecting the player directly to the 4-foot HDMI in the glove box. Occasionally I'd get a movie to play, but as soon as I stopped and restarted the player, the ‘No signal’ banner re-appeared.

I decided to order and test an in-line HDMI signal booster. When the booster arrived, I installed the device, and had no change. 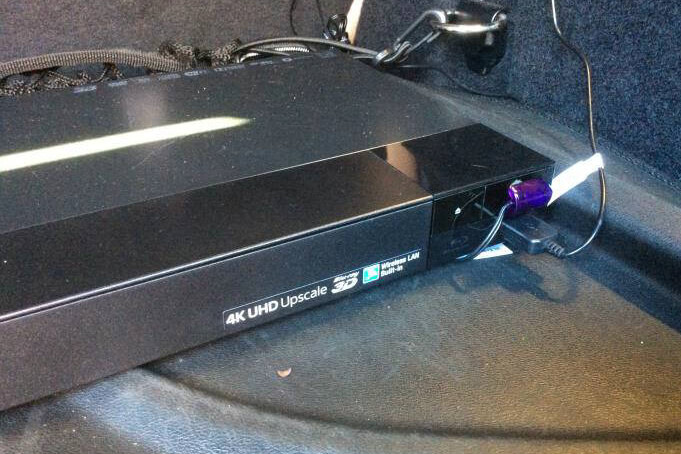 This time I also tested another Blu-ray player that we had at home. I connected it just like the failing Blu-ray player, but this player played perfectly. I cycled the power to the device, swapped movies, and it played perfectly every time. So the issue was the player the entire time. Why it worked occasionally, I never figured out what was different between the players. 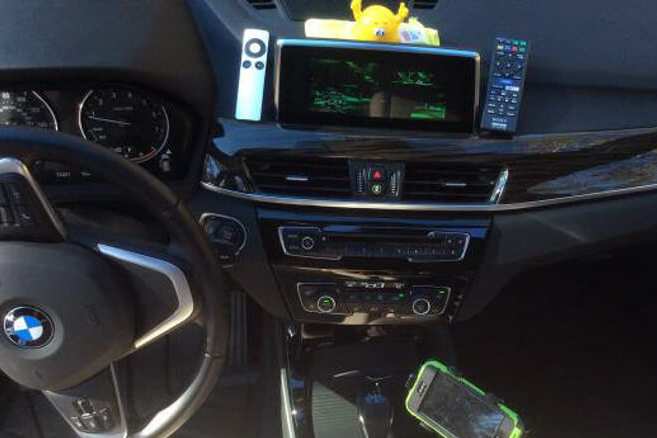 I now had a very functional SmartView HD installation with the Apple 3 TV on the HDMI-1 port and a functional Sony Blu-ray player on the HDMI-2 port. Swapping between the stock iDrive/Navigational system and the two HDMI ports was very simple and integrated perfectly. Between my mirrored iOS apps, native Apple TV apps and my Blu-ray collection, I finally had a pretty solid range of multimedia available in my car. 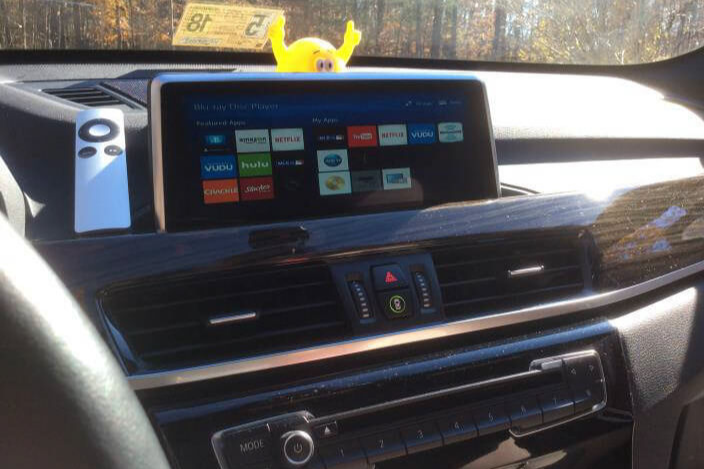 I noticed while using the Blu-ray player that the picture would occasionally drop out for 3-5 seconds and reconnect. I tried to find a pattern to the drops, but never did. As far as I could tell, there weren't any loose connections.

I decided to clean-up the cabling that terminated inside the glove box with an HDMI coupler. This coupler eliminated a pig tail cable, and allowed me to move the 4-foot cable further from the fuse box located directly behind the glove box. This coupler and cable move seems to have removed 99% of the signal drops I was experiencing. 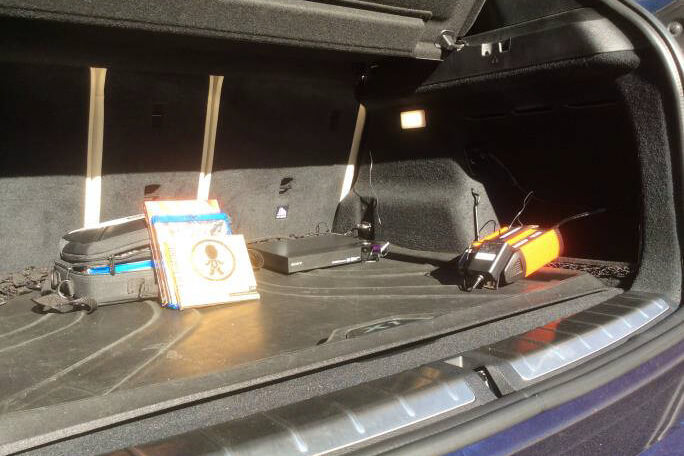 My personal experience with my BMW has greatly improved with the installation of the BimmerTech SmartView HD system. I now have a vehicle that I thoroughly enjoy inside and out. I have always loved the vehicle styling, paint color, and driving experience that the BMW brings, and now I have many more comfort features available from the SmartView system.

For someone like myself that likes technology and having access even on the go, this is a perfect fit. I now, more than ever, look forward to taking a ride in my ‘Perfected’ BMW. Have you been working on a project including a BimmerTech kit? Let us know, we'd love to hear about it!