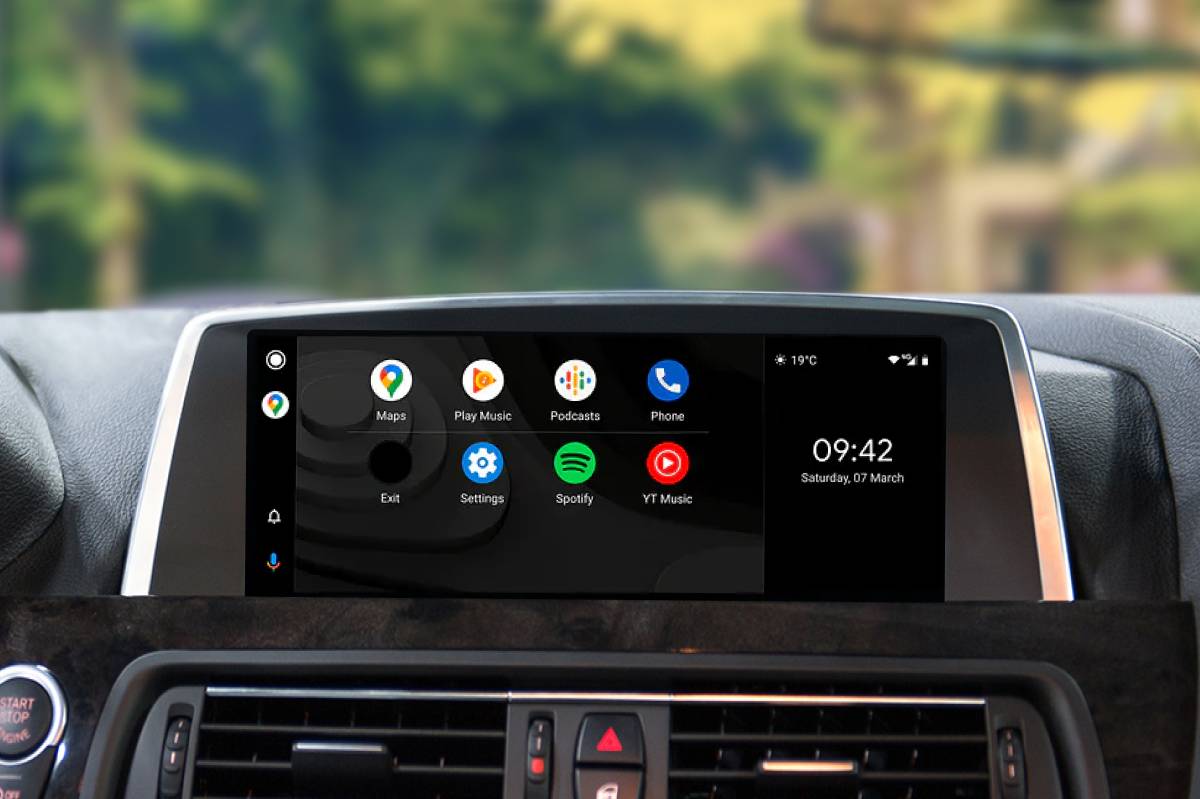 Everybody gangsta until they’re stuck on a road trip with Android Auto not working. Whether it’s because Android Auto keeps disconnecting, or the Android Auto screen is shutting, having your infotainment system go down is a lot of people’s idea of hell.

The good news is there’s often a quick and easy fix to get you back up and running.

NOTE: This blog was created for educational purposes only. Our support team won’t be able to help you out if you activated Android Auto at the BMW dealership or with a third-party provider.

For the most common BMW Android Auto issues, there’s a decent chance you aren’t the first person to experience it. In the spirit of standing on the shoulders of giants, you can take inspiration from some tried and tested Android Auto troubleshooting tips and narrow down the problem pretty quickly. 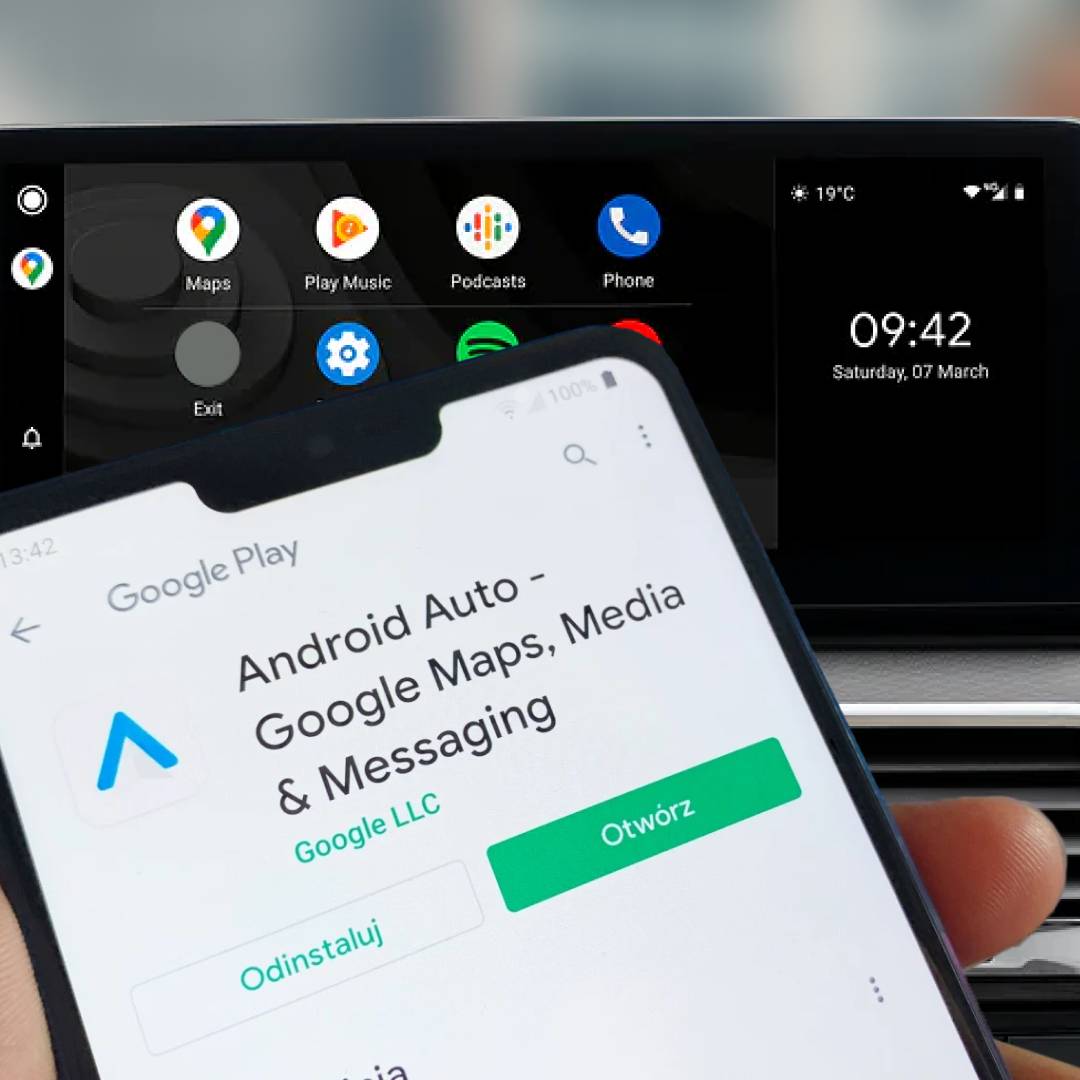 Probably the worst scenario is having Android Auto not connecting to your BMW/MINI at all. Zilch, nada, no dice. That’s going to mean no navigation, no messaging, nothing that makes Android Auto so great to have in your car.

If this is your first time using BMW Android Auto, double check you know how to connect Android Auto in your vehicle and configure your Android Auto settings correctly.

For older phones (running Android 9 “Pie” or earlier), first check that the Android Auto app has been downloaded from the Google Play Store; without it, you won’t be able to use Android Auto in your BMW/MINI. That won’t be necessary for current generation phones, or older phones that have been updated to Android 10 or later after launch, such as the Samsung Galaxy S9.

For phones running a more recent version of Android, BMW Android Auto is baked into the operating system, but you still want to be sure it’s enabled. Check your phone’s settings to make sure Android Auto or Google Assistant’s Driving Mode are enabled, which you can do by asking Google Assistant to open Assistant settings and checking under ‘Transportation’.

As BMWs support wireless Android Auto, you’ll also need to check that wireless projection is enabled in your Android Auto settings. For third-party Android Auto systems that support a wired connection, you can also check if connection works with a cable, and double-check the cable itself isn’t damaged if not. It’s in fact a vital step if you’re running on a wired Android Auto connection, as faulty cables are often the ones to cause issues with connecting to your hub and launching it in the first place. 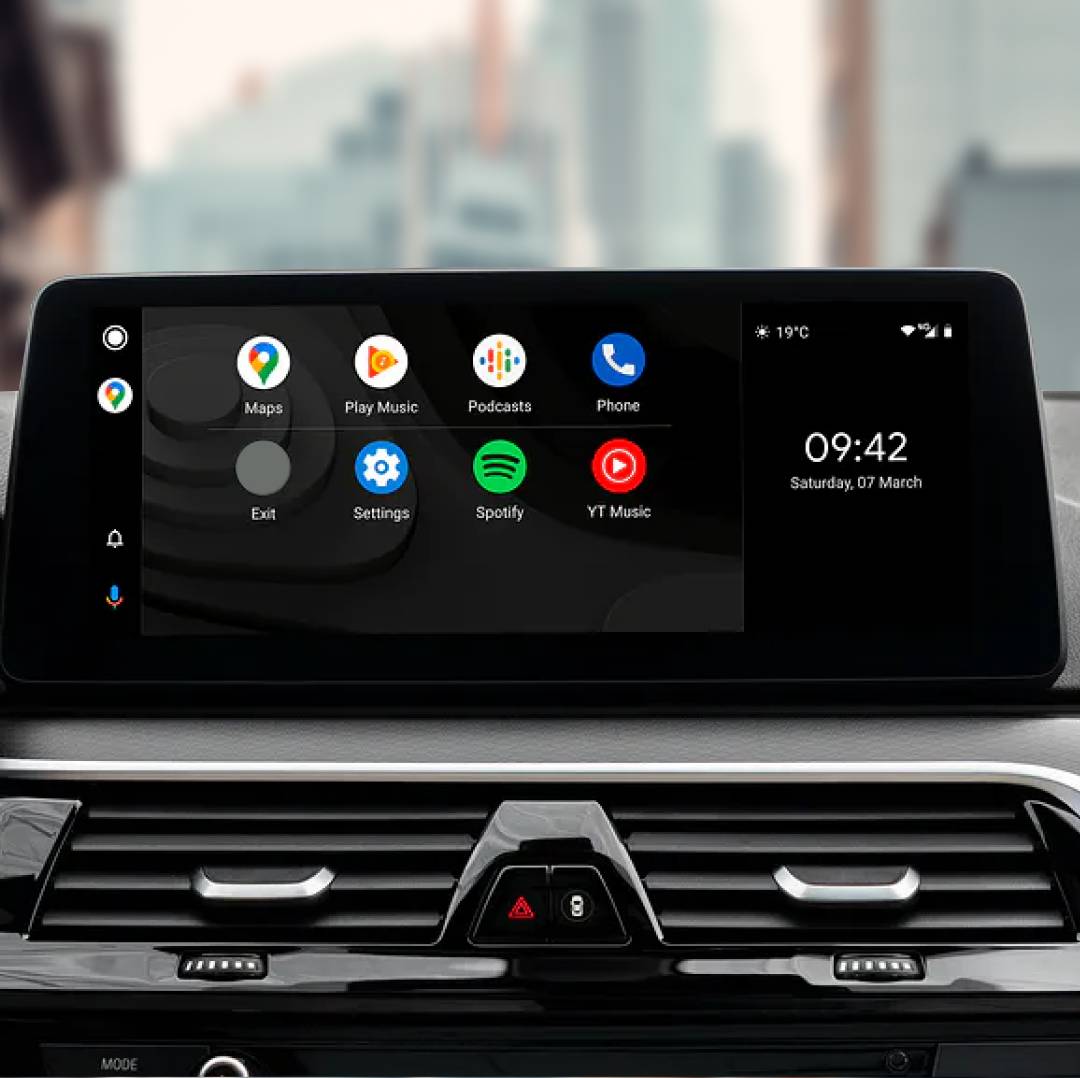 If using the Android Auto app, you need to make sure you’re running the latest available version for your device. Android usually manages that for you for any apps installed through the Play Store, but if you installed the Android Auto app from a third-party store, or your device isn’t able to download and install app updates, the app might be missing the latest features.

Keep in mind that all video streaming apps will not work due to safety regulations. If you want to entertain your passengers, read how to watch YouTube or Netflix on CarPlay.

As above, you also want to make sure your phone is able to connect, by enabling BMW Android Auto and wireless projection in your phone’s settings, and checking that Google Assistant’s Driving Mode is properly configured. 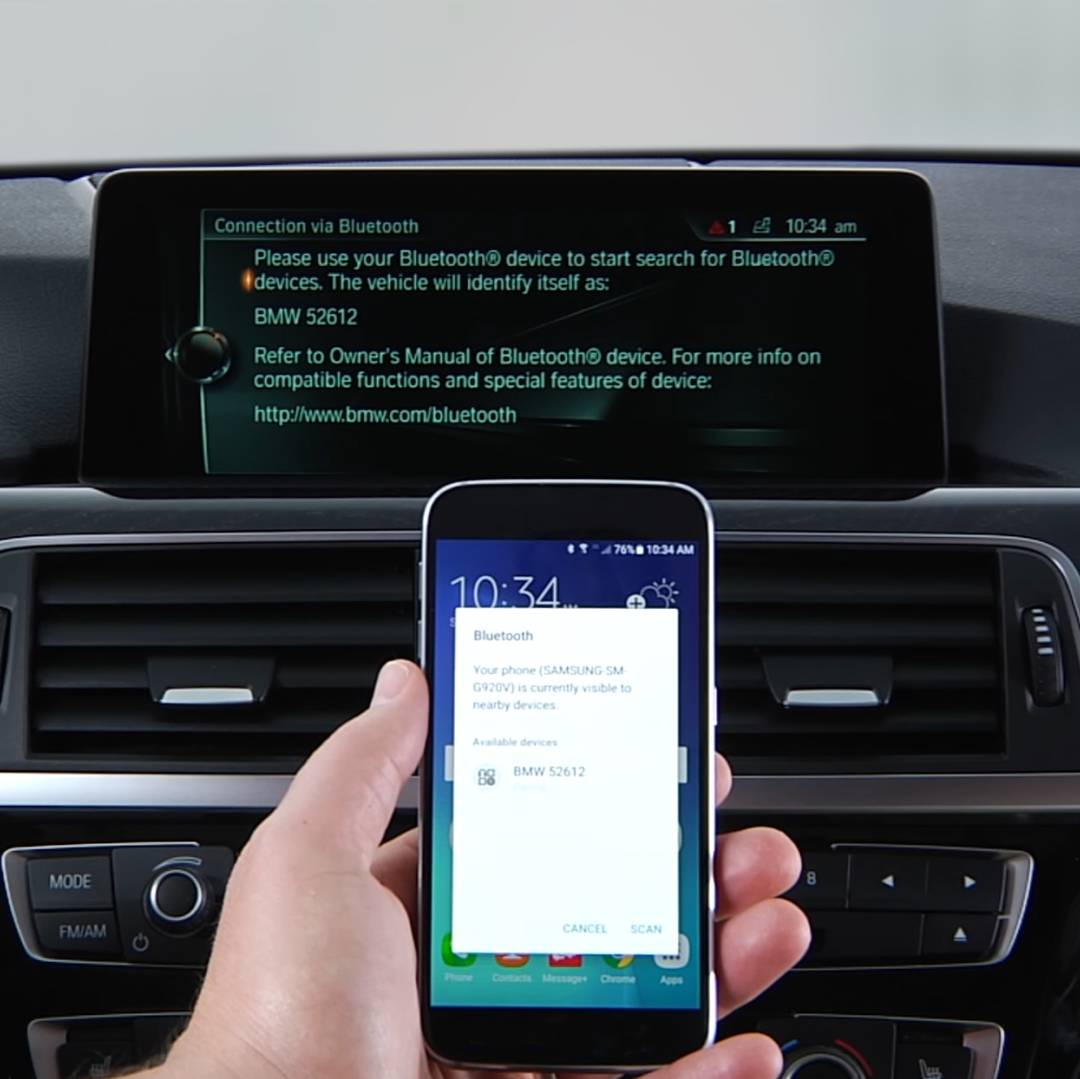 Even more annoying than not being able to connect at all is getting everything started, and then out of nowhere… Android Auto disconnects :(

Due to the nature of wired vs wireless connections, this is a problem that is going to be more common when connecting wirelessly — the only connection method available with the factory BMW/MINI Android Auto system, which doesn’t support using a USB cable for Android Auto.

If you’re wondering does Android Auto work over Bluetooth, wireless Android Auto actually uses both Bluetooth and WiFi, so there are two possible points of connection failure.

If you have the option of using a wired connection, it can be worth trying out, to see if stability improves. If it does, you know you’re dealing with Android Auto connection issues.

As always, the most important Android Auto troubleshooting tip is to make sure the app (for phones that require it) is up-to-date, and you’re using the latest Android version available for your device. That’s going to guarantee the most stable connection.

If you’re using 2 phones, make sure they’re named differently in device settings. It may very well happen that your Android Auto won’t connect, because it’s getting confused which phone to pair up with.

To change your phone name go to Google Play settings. 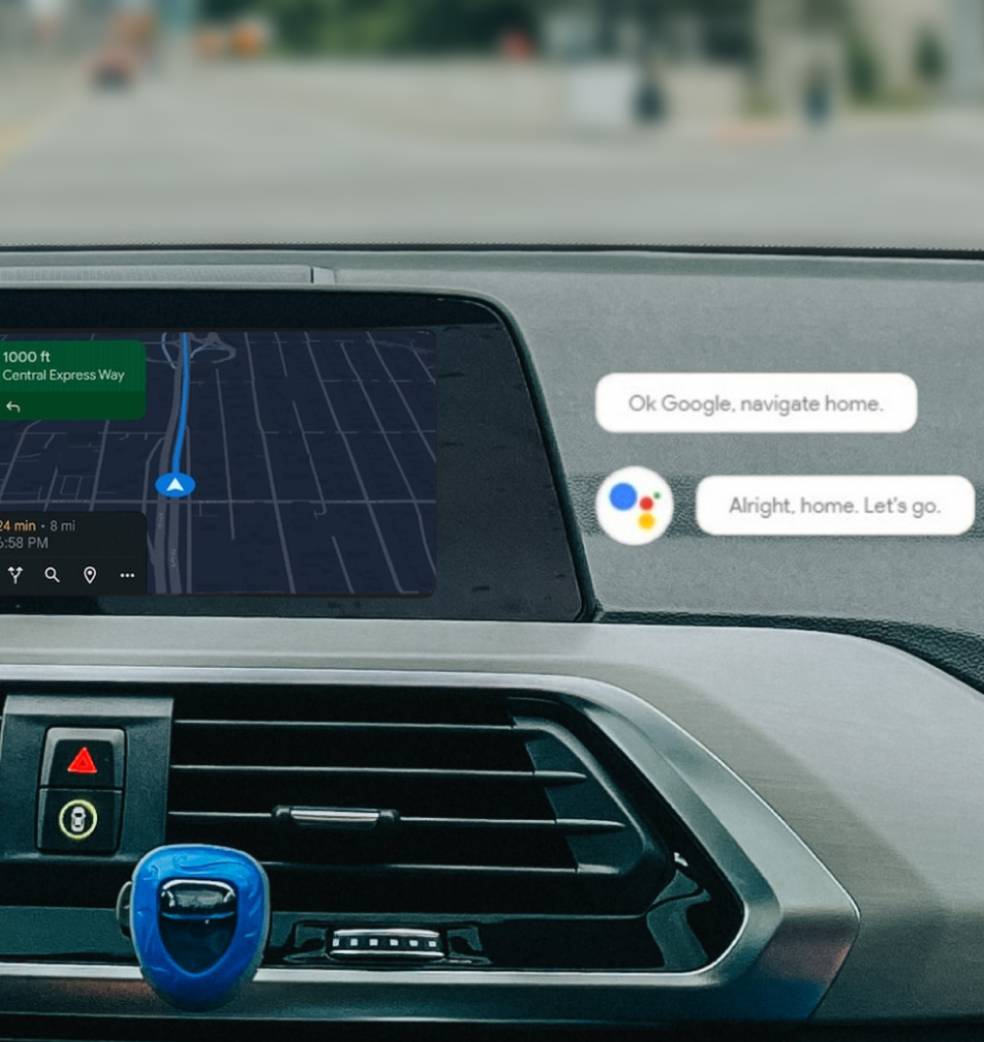 Google offers many ways to use BMW Android Auto and Google Assistant while driving. The most convenient way is on your car’s factory dashboard display, so if you’re struggling to use Android Auto on the BMW iDrive screen, it’s bound to be frustrating.

Firstly, make sure you have Android Auto activated in your BMW/MINI. It’s possible to use the Android Auto app or Google Assistant Driving Mode on your Android device without any connection to your vehicle, but that doesn’t support using Android Auto on the iDrive display.

If you’re sure Android Auto is supported in your BMW/MINI, and you can use Android Auto on your phone, it’s most likely a connection issue. See above for some Android Auto troubleshooting tips that might help out.

When using BMW Android Auto and navigation directly on your Android device, the last thing you want is for your screen’s display to shut off. In general, your phone is smart enough to realize that, so you won't go to sleep — even after you’ve been inactive for a while.

If it doesn’t, chances are you aren’t using your device in drive mode. Google Assistant’s Driving Mode makes sure your phone behaves properly for easy use behind the wheel, which includes keeping the screen awake. Before you set off on a drive, make sure you use a Google Assistant voice command like “let’s drive” to switch driving mode on.

If you’re using BMW Android Auto on your car’s dashboard display and the picture is cutting out, you’ve got a connectivity issue on your hands. Take a look above at how to tackle that. 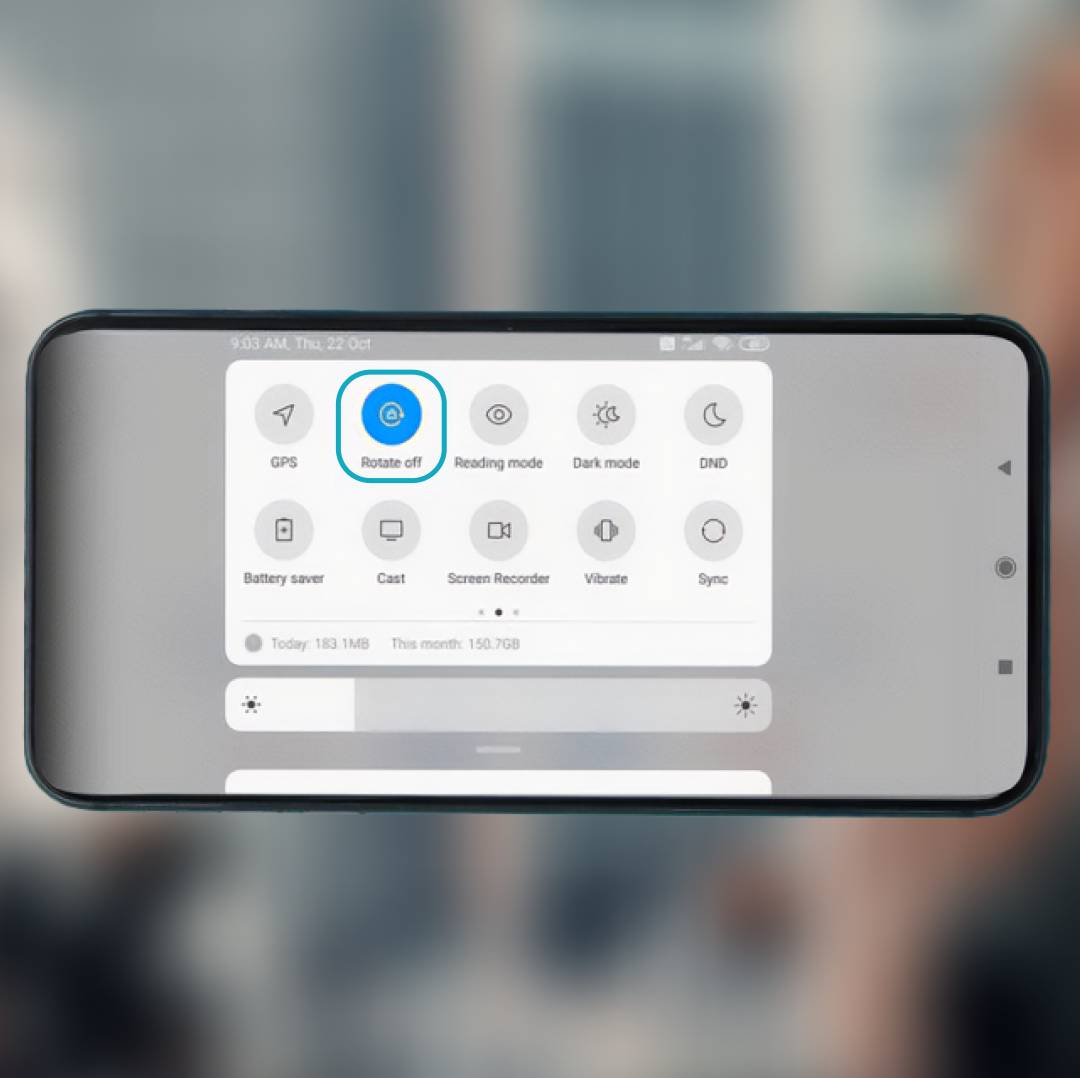 Using Android Auto or Google Assistant Driving Mode on your phone also means you might want to mount your device in landscape for a better view. But if the picture isn’t adjusting to suit, you’re not going to have a good time.

You should check if auto-rotate is enabled in your phone’s settings. If you aren’t sure, try rotating your phone while browsing the internet — if the text doesn’t rotate automatically, it’s a good sign it needs to be switched on.

On most devices, you can open quick settings (for example, by dragging your finger down from the top of the screen) and you’ll find the rotation toggle there.

Android Auto not working after update

Installing the Android Auto app through the Play Store usually means you’ll always have a stable, working version for your device. If you’re sideloading the app or installing through a third-party store, there’s a chance you might have installed a cutting-edge version of the app that isn’t fully supported.

Roll back the Android Auto app version to the latest stable version, by downloading the APK online. With that installed, you should be able to reconnect with BMW Android Auto.

In some cases, the update may have wiped or adjusted your Android Auto settings, so you should also double-check everything is still configured correctly.

How to turn off Android Auto?

If you’ve had enough of Android Auto, it’s easy to switch off. In your BMW/MINI, you can use the iDrive controller to move back to the native iDrive menu. If you want to stop Android Auto permanently, on your phone you can open your settings and unpair your phone and vehicle. Then, Android Auto won’t connect next time you’re in your car.

How to upgrade Android Auto? 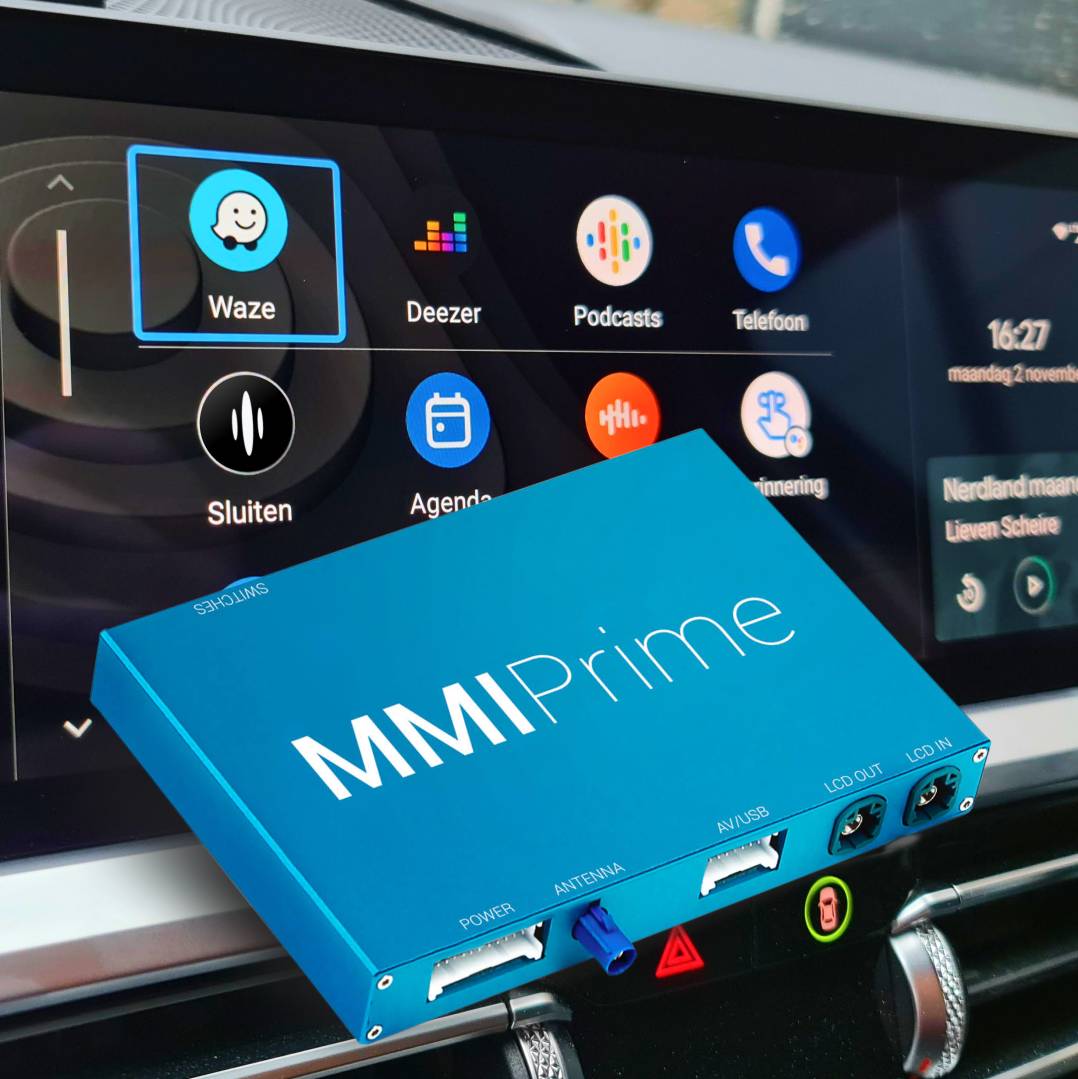 …but of course, most people won’t want to turn off Android Auto ;) In fact, quite the opposite: they want more of it, and more Android Auto features! Upgrading Android Auto can do just that, unlocking new possibilities in your vehicle.

The system itself is updated alongside the rest of your Android device, and usually happens in the background without you even knowing. How’s that for convenience? Those upgrades will then be available however you use Android Auto, whether with your vehicle’s built-in Android Auto system, or a third-party retrofit.

Some of those aftermarket upgrades, like BimmerTech’s Android Auto MMI Prime for BMW/MINI, can also be upgraded by installing new software to the device, released periodically by our team. That can add even more features and better performance.

Hopefully, all your Android Auto connection issues have been solved, and you’re ready to head out there in your BMW or MINI. Still got any issues? Let us know in the comments and our experts will do their best to help out.