5 Smart Ways To Use Android Auto in BMW X3 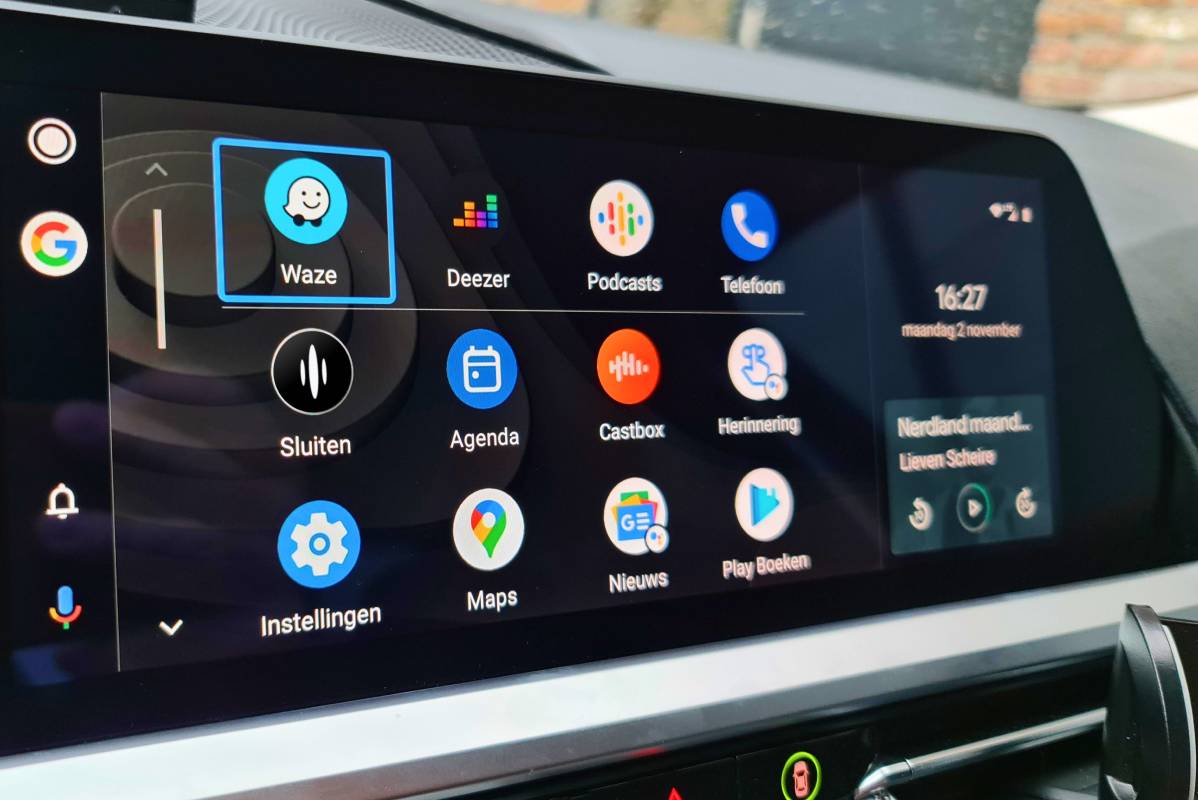 Android Auto: everybody’s using it. Well, everybody with an Android phone and a recent vehicle, that is ;) BMW owners are no different, of course, so since the Bavarians started offering Android Auto, BMW X3 drivers and others have been flocking to get their phones connected to their iDrive systems.

But what are they actually doing with BMW Android Auto? And if you don’t already have it activated, are there any BMW Android Auto retrofits you can turn to to start using Android Auto on BMW? We’re about to answer all those questions and more!

With the rise of the SUV, The BMW X3 has become one of the most popular ranges in BMW’s line-up. It’s easy to see why: great performance and those signature BMW looks, all wrapped up in the comfort of an SUV.

When did BMW X3 get Android Auto 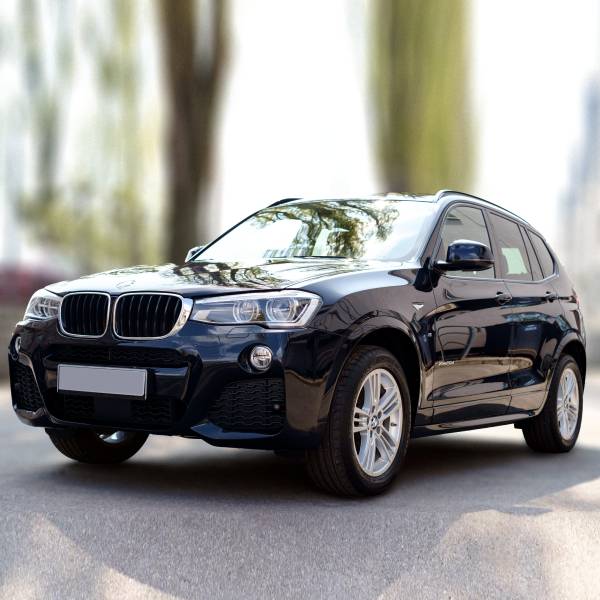 Whether that comfort and convenience is there for you to use is going to depend on which generation X3 you have, though, and even when in the production cycle your vehicle is from. Take the G01 X3, for example. In the 2020 BMW X3, Android Auto is definitely on the table, but if you want to get Android Auto on 2018 BMW X3, things won’t be so easy. And that’s without saying anything about the previous generation BMW X3 F25…

That’s because BMW was a little late to the party when it comes to Android Auto, only introducing it in 2020. That means only X3s produced after 2020, that are also equipped with the BMW Live Cockpit Professional option and BMW iDrive 7, are going to be able to get BMW Android Auto from the factory.

Find out more about BMW Android Auto in our expert guide

Compare that to the other side of the Android/iPhone divide – in the BMW X3, Apple CarPlay had been a factory option for years before Android Auto made its debut.

If you’re lucky enough to already have Android Auto, there are a few functions you’re definitely going to want to take a look at. 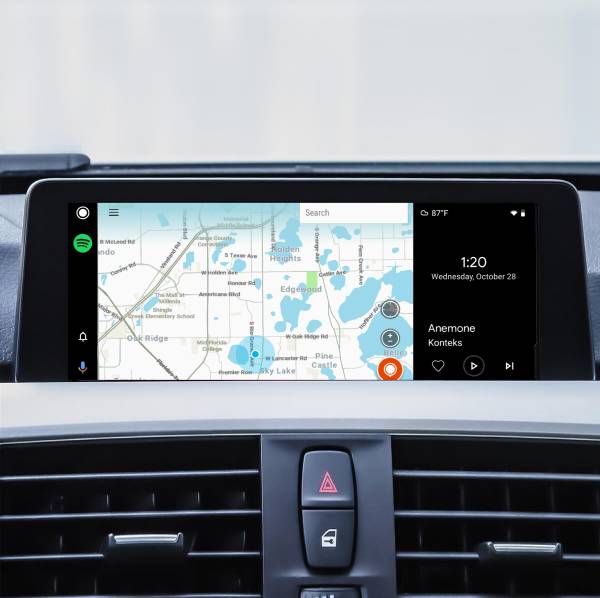 The first thing a lot of people use BMW Android Auto for is navigation, and why not? The Android Auto navigation apps are often more accurate and up-to-date than the native iDrive navigation system.

The fact that Android Auto leverages your smartphone’s apps means you know exactly what to expect. Using Google Maps on your phone has told you all you need to know about how it works, what features are on offer and how accurate it is in your local area. You might have also set up your home address and a few favorite locations. Using the Android Auto Google Maps app on the BMW X3 iDrive screen means you’ll always know how to get from A to B.

To make it easy to set your destination, complete Google Assistant–Android Auto integration means you can use voice control to request navigation directions. Just ask where you want to go, and Android Auto will show you the way. Or if you prefer to get a little more tactile, you can use the iDrive controller or (in vehicles fitted with one) touchscreen display, too.

Best of all, you aren’t limited in your navigation choice. Prefer Waze or TomTom to Google Maps? No problem, Android Auto lets you switch up your apps – something the native iDrive navigation system doesn’t. 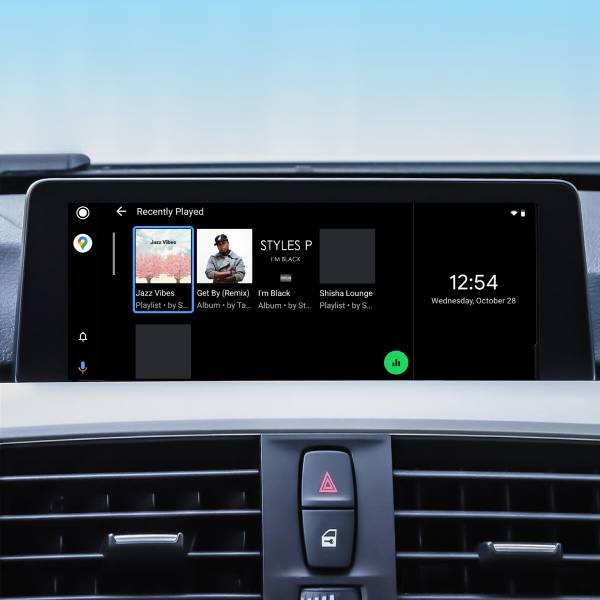 You’ll find that same freedom when it comes to music. The native BMW iDrive system offers a few music options, but it’s nothing like the range of Android Auto music apps. In an Android Auto vs BMW iDrive contest, it’s Android Auto that wins hands down ;)

Again, using Google Assistant with BMW Android Auto makes it quick, easy and safe to play your favorite music when driving. Got a Spotify playlist of great driving songs? Well, just ask Google Assistant to put it on for you. All the same voice commands you already use on your phone or smart home stereo are going to work in your BMW X3 with Android Auto.

Everybody has their own opinion on which is the best music app for Android Auto. For those who don’t love Spotify, Android Auto doesn’t stop you from picking another streaming app, like Tidal, Amazon Music or the YouTube Music Android Auto app, to use in your BMW X3 instead. Or ditch the music altogether and reach for your favorite radio, podcast or audiobook app. 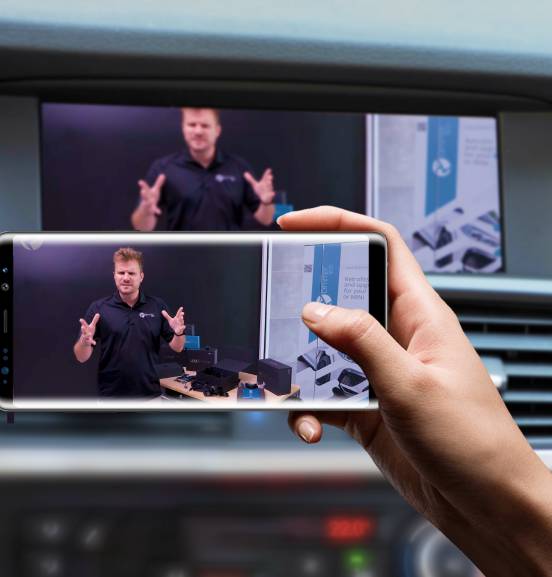 Music’s one thing, but let’s keep the entertainment going! How about a video or two?

Hold on just a second there. Depending on your point of view, Android Auto’s lack of support for video is either a valuable safety feature, or its Achilles heel.

Of course, nobody’s going to suggest it’s a good idea for you to watch videos when driving, which is the reason video apps like YouTube and Netflix are conspicuously absent from your Android Auto home screen. But when you’ve pulled over on a long drive? Nothing wrong with putting on a quick video in our books ;)

While Android Auto isn’t going to be any help with video, many F25 BMW X3s have the required hardware for Android Screen Mirroring – a little bone BMW threw to Android users before it finally got round to launching Android Auto.

With it, you can cast your phone’s screen to your X3s dashboard display, so you can browse the web, look at photos or play videos from YouTube. Note that some video streaming apps, including Netflix, use DRM technology to prevent screen mirroring, so you might not be able to access all your content. 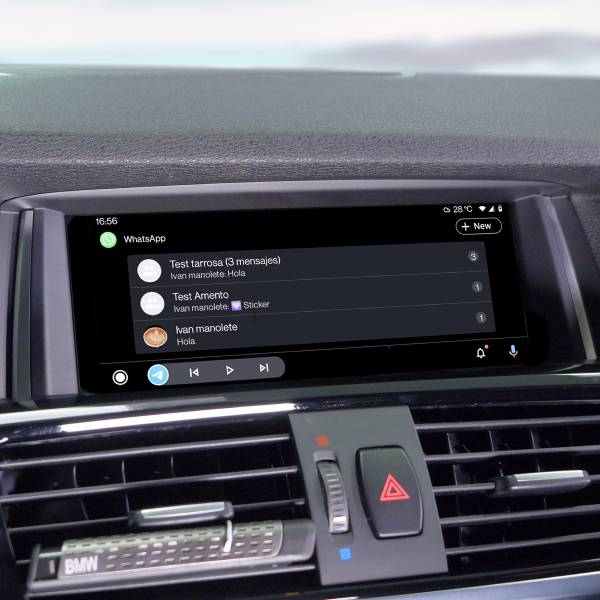 Something else you’re probably going to want to do when driving is keep in touch with friends and loved ones. Surprise surprise, that’s another of the many things you can do with Android Auto Google Assistant ;)

If your BMW X3 has Android Auto, WhatsApp, text messages, Telegram and more are always available. Most apps include Google Assistant integration, so you can dictate your messages and send them easily. Supported apps, including your phone’s SMS, will also read incoming notifications out to you, so you’ll be able to get updates without taking your eyes off the road. 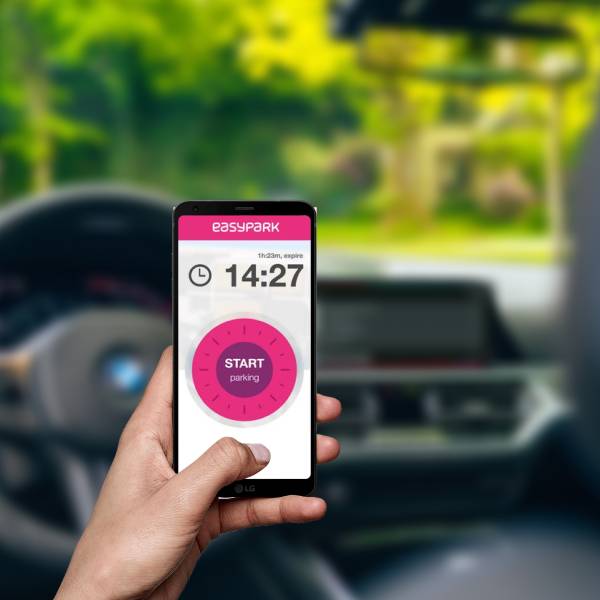 Music and messaging is one thing, but as you’re in your BMW X3, you’re probably going to be looking for something a little bit more driving-related, too.

As we all know, the worst part of driving is when it ends, and you have to hunt for a parking spot – particularly if you’re in an unfamiliar urban area. There are Android Auto parking apps to make the whole ordeal that little bit easier.

There’s a little crossover with navigation here; one of the advantages of having Google Maps in your BMW X3 is being able to find whatever point of interest you want, including parking lots. But a dedicated parking app, like SpotHero for Android, can offer a few more features.

If you’re a little forgetful, Android Auto parking apps like Parkify will even help you find your way back to your vehicle, automatically detecting where you left it last.

How to add Android Auto to BMW X3

Looking at this list of possible features, it’s no surprise BMW Android Auto is so popular. But if you don’t already have it activated, you’re probably feeling a little jealous right now :/

Well fear not, because the BMW specialists at BimmerTech have a few tricks up their sleeves to help you get Android Auto up and running in your BMW X3. Depending on your X3 generation, you can either activate the BMW original Android Auto, or go for a BMW Android Auto retrofit instead.

As many post-2020 vehicles come from the factory with Android Auto, BMW G01 X3 drivers often won’t have any problem activating Android Auto. Depending on your vehicle, all the necessary hardware and software may already be there, you only need to unlock the BMW Android Auto feature.

That’s something BimmerTech’s coding expert can do remotely. Not only will you not need to install any new hardware in your BMW, you won’t even need to leave home! You’ll only need a laptop and 30 minutes with our technician at a time that suits you.

You can activate Android Auto for BMW X3 in all vehicles with iDrive 7 and BMW Live Cockpit Professional. Just enter your VIN to check compatibility.

We didn’t want to see owners of older vehicles miss out, though. That’s why we introduced Android Auto for BMW F25 X3 through a BMW Android Auto retrofit.

BimmerTech’s Android Auto MMI Prime retrofit for BMWs offers great integration with your existing iDrive system and dashboard screen. Just switch from the iDrive interface into Android Auto using your iDrive controls, and you’ll have your favorite Android apps on your X3’s dashboard.

Unlike BMW’s own Android Auto system, though, Android Auto MMI Prime also lets you use a USB cable for Android Auto instead. Just plug your phone into the provided USB port and you’re good to go.

More than just for Android fans, Android Auto MMI Prime also doubles up as a BMW Apple CarPlay upgrade – great for families split between the two smartphone camps, so everybody can connect just as easily.

Of course, Apple CarPlay’s app selection lets you use pretty similar features to the ones we’ve covered above. Think we’ve missed anything out? Let us know how you use Android Auto in your BMW X3 in the comments below.