BimmerTech’s Alpha One vs Harman Kardon BMW speakers… Metrics told us many of you have been wondering what the difference is between these two ;)

Honestly, we could go on and on about BMW sound system specs – which we do in fact here for those interested – but keeping the whole sound comparison in audio technology jargon won’t be much use to the average music fan who just wishes to experience the musical contrast firsthand.

What might be of help though, are a few video reviews from avid music fans like yourself, who, in their own no-pro words, compared the two prominent audio systems together.

So for all the audio enthusiasts out there looking for a new BMW stereo set, or wondering whether their BMW Harman Kardon sound system would benefit from upgrading, it may be worth taking a look at those!

What is Harman Kardon in BMW?

If you’ve never heard a single thing about Harman Kardon, you must have been living under a rock for a good three decades. To put it briefly, Harman Kardon is a renowned American car audio supplier that’s been in consistent partnership with BMW for 11 years.

The unweakened bond between those two doesn’t however mean that Harman Kardon stereos are as good as it gets. You can always strive for better ;)

Why’s that exactly? Some of you may be under the impression that what you call a Harman Kardon must carry the aura of the household audio system, with its astonishingly high volume levels. Yet, as a matter of fact, the BMW Harman Kardon Hi-Fi system (S674A) is only a modest relative of the BMW Harman Kardon surround sound system (S688A), and was dedicated for smaller chassis cars. That, of course, was a great misfortune for many i3 or 2-Series owners who expected to be swept off their feet by the heaps of power, but ended up with an audio set which barely resembled the promised quality.

The BMW HK Hi-Fi system (S674A) consists of 12 speakers and an 8-channel BMW amplifier fitted in the trunk (with only 7 channels used to power the speakers)... Meaning, the overall audio quality is decent, but it’s far from audiophile standards.

The BMW Harman Kardon surround sound system (S688A) on the other hand is probably the one you have in mind when thinking of a premium sound system. This abundant option, appearing in larger vehicles such as the X5, 3 or 5 Series, usually comes with 16 speakers – including 2 (8 Ohm) woofers, and 7 mid-ranges along with 7 tweeters placed all over the vehicle. And sure, they’re more than decent – certainly much better than most of the stock options – yet still not quite there as an enthusiast-level standard.

For people who have them and are into sound system customization, it’s also worth keeping in mind that the BMW Harman Kardon subwoofers come with an 8-ohm impedance, which is higher than you'll find in other BMWs. Hence, when replacing the woofers for something a bit beefier, staying within a similar impedance will be much more beneficial to the audio effect.

Now, Harman Kardon’s (S688A) heart – the amplifier. Having 10 channels with enough power to shake up your whole neighbourhood, it’s undoubtedly the heaviest hitting out of all the standard factory BMW amps. Compared to others, it uses fiber optic wiring to keep the digital signal as clear as possible and the music sounding just as it was recorded.

Thanks to the BMW Harman Kardon equalizer settings, you can also customize the music to your liking right from the head unit level.

Compare that to the little brother amplifier in the S674A system – 8 channels, lower output and fewer customizability options. In reality, it's not much different from BMW's run-of-the-mill amplifier, only improved by the slightly better quality of the Harman Kardon branded speakers. You'd definitely hear an improvement stepping that amp up to a more premium option.

Want to know more about the amplifiers’ role in your BMW audio? Check out this blog post.

Since BMW started partnering with Harman Kardon 11 years ago, during the production run of the E9x 3 Series, all 2010 E9x and many later models started featuring the S688A Harman Kardon sound system with the powerful amplifier.

But, due to space constraints, the little guys (such as MINIs, 1 Series, 2 Series and i3s) unfortunately had to go without and include the less robust S674A option instead.

How do I know if my BMW has Harman Kardon?

HK certainly doesn’t hide its presence around the vehicle, so you’ll most likely notice it at one point or another, whether that would be by Harman Kardon branding scattered on every single speaker, or the sizable speaker count itself.

Probably the best way to spot it though is through the equalizer settings and surround sound option in the iDrive menu – after all, HK is not just hardware, but an audio system with a multi-band graphic equalizer and audio adjustment possibilities.

If your iDrive audio settings look more stripped back than that, then there’s a good chance you don’t have Harman Kardon in your BMW and might benefit from an upgrade.

But, can you do better than that?

With BimmerTech’s high-end Alpha One speaker upgrades, you’ll definitely get that extra bit of crispness, punch and clarity from your BMW Harman Kardon surround sound (S688A) system to make your audio unrivalled. We prepared our Alpha One speaker kits to match your needs, so whether you decide to replace your full speaker set or only the subs, that won’t lessen the knock out effect of a premium upgrade.

And if you have a BMW with HK (S647A), upgrading the Premium Audio System alongside the speakers will pump in even more power, optimized stereo imaging, smoother frequency response and more customization possibilities than before.

Don’t take us on our word? Check out BMW Harman Kardon sound system reviews and see what others make of it.

Let’s start off with our not so newbie reviewer – Bryan from Kies Motorsports.

Bryan tested out our speakers on his buddy’s 2019 BMW G20 M340i with iDrive 7.0 and BMW Harman Kardon surround sound system (S688A). As he put it well, a YouTube video is never going to give out the authentic differences between the two systems – especially the all-encompassing deep bass, which you’re only bound to feel through your bones. So to fill the void of what video websites can’t deliver, he described the subtle contrasts in his own illustrative words:

In this audio upgrade, we went full on ;)

Since Stefan’s F87 M2 was equipped with Harman Kardon (S674A) we were able to replace both his complete set of speakers as well as the amp – and most importantly what comes with it – personalize the sound design according to his musical taste, his style of listening and car chassis. The result? Hear for yourself:

CJ’s SUV was equipped with BMW Harman Kardon surround sound system (S688A), so it already had a proper audio kick to it. However, what CJ felt he missed out on was the possibility to crank the music all the way up and not worry about any distortions coming out from the speakers. Our BMW F15 speaker replacements worked perfectly for that – the tracks got cleaner and more resonant at low frequencies, and didn’t lose their crispness in the highs. Our friend couldn’t be happier! 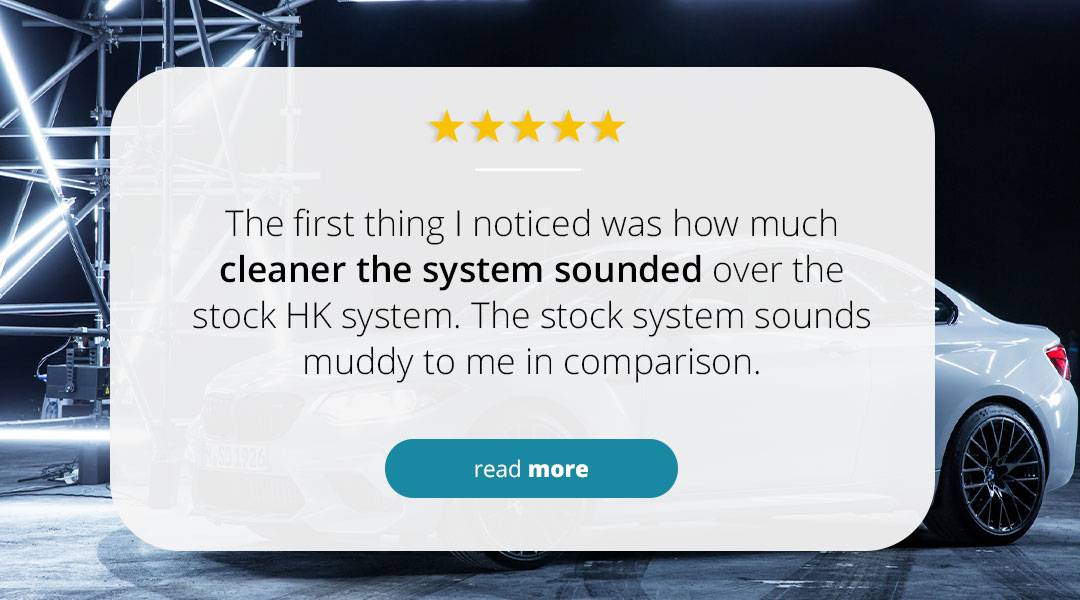 … And now what? How are you going to handle this few hour install?

Well, you’ve got two options. You can either install it by yourself or with the help of an authorized expert.

If you feel it’ll be a tough nut to crack for a rookie DIY-er like yourself, you couldn’t be more wrong ;) We’ve designed our BMW speaker upgrades to match every bolt and screw of the stock kit, so the installation is as straightforward as disassembling and removing the old set and popping the new one in. No cable trimming or installing additional parts will be necessary – it’s just an easy plug & play procedure that will take 4 hours of your spare time. Should you ever feel like going back to your factory setup, you can freely do so, since the upgrade is fully reversible.

Is ‘straightforward’ too vague for you? Let’s put it this way then – if you’re doing ok with IKEA projects, you’ll be totally fine with this one ;) Here’s an exemplary install of our BMW speaker and amplifier upgrades in M2 with Harman Kardon (S647A).

For folks who were not born to tinker or simply don’t have enough time to spare, we’ve also got a broad network of authorized installers, who can handle this job in no time. Check the nearest one to you.

Want to hear more about the BMW Harman Kardon speakers and amplifier? Let us know down below in the comment section. We’re open for your ideas!