Delivery in 2-7 days: We are shipping as usual, worldwide and for free!
Category: iDrive Technology Insights

You either love them or hate them. There’s a lot of ambiguity when it comes to BMW auto start-stop systems. Whether they’re bad for the car's engine or actually don’t cause that much harm. Do they help in potential fuel savings or is it just wishful thinking? Are they battery drainers or not at all?  We’re here to break it all down for you.

If you own a vehicle with a start-stop function, or thinking of buying one, this guide will provide you with the most vital and searched for information on how to use the system while keeping your car in good shape. 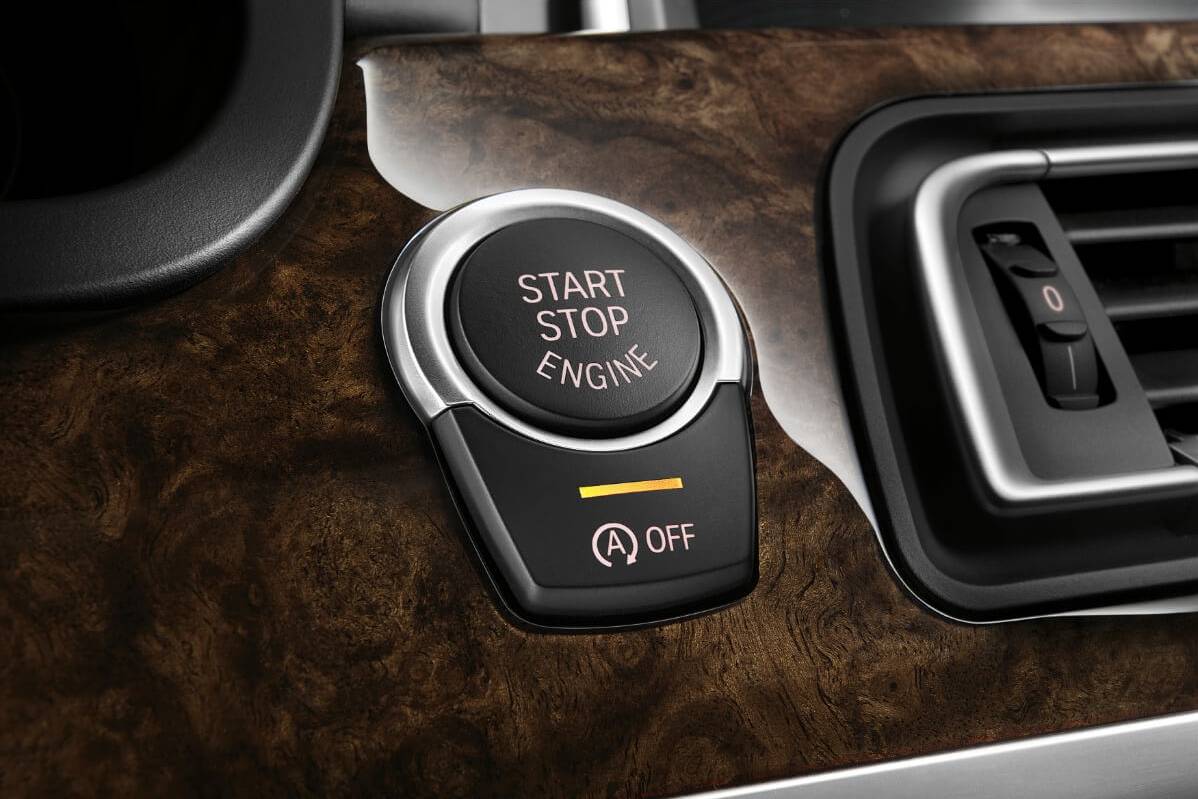 What is the auto start-stop in BMW?

The aim is simple – to cleverly reduce your fuel consumption. The BMW auto start-stop system automatically shuts down and restarts the internal combustion engine to minimize the amount of time the engine spends idling, at the same time reducing fuel consumption and CO2 emissions. It can be especially beneficial for those who spend a larger amount of time waiting in traffic jams, as it’s only consistent use that results in significant reductions.

With regard to BMW vehicles, start-stop technology is used in BMWs and MINIs as a part of their Efficient Dynamics brand. The system is present both in hybrid electric and non-electric cars, as well as those with automatic and manual transmissions.

BMW auto start-stop function turns off the engine each time the car comes to a full halt (e.g at crossings, traffic lights, traffic jams) and then turns it on automatically, at all times keeping safety issues in mind.

The function is coordinated by the central control unit that monitors data from all relevant sensors, the alternator and the starter motor. So it will not be activated if e.g.:

If needed, the control unit can also automatically restart the engine – it may happen when the battery charge is low, the car starts rolling down or condensation forms on the windscreen.

What’s also safe and convenient about the BMW auto start-stop system is that nothing is accidental. The system fully recognizes the difference between a temporary stop and the end of the journey, hence there’s no way it could restart on its own as you get off. For the engine to restart you’d have to have your seatbelts on and the doors and hood closed.

How to use BMW auto start-stop?

How to use BMW auto start-stop in cars with automatic transmission?

In cars with automatic transmission, the BMW auto start-stop function will shut off your engine when you hold the brake after coming to a complete stop – it’ll be signaled on the instrument cluster. Lifting your foot off the brake or turning the steering wheel will restart your engine immediately and bring you up to speed in a matter of seconds.

How to use BMW auto start-stop in cars with manual transmission?

On a manual transmission BMW, auto start-stop activates itself as follows: first, stop the car and press the clutch; then, shift the gear lever to neutral and release the clutch. At that point your engine will turn off. Keep in mind that for the engine to turn off your car has to stop – the auto start-stop will not work on a moving vehicle, even if all of the above steps are followed. To turn the engine back on again push the clutch pedal and select a gear.

How much fuel does start-stop save?

It all depends on the driving conditions – the general rule is the longer you idle, the more you save. If you stop briefly at a few crossings you’ll save less fuel than drivers who idle in traffic jams or at long signals. Moreover, the use of air-conditioning and hot weather can also negatively affect fuel economy. It was proved that the largest gains came during mild weather. Considering these and other circumstances, engineers estimated that the range of fuel savings oscillates between 3% up to 12%.

Basically, it boils down to a simple calculation. If during 80 miles ride in mild weather your vehicle usually uses 3.1 gallons with auto start-stop turned off, after turning it on it will use 2.8 gallons, saving 9.5% in fuel. That is a fuel economy rise from 26.2 to 28.7 mpg.

Although the auto start-stop function has been included in BMWs since 2008, it still stirs up many controversies and debates. Is turning off the engine actually worthwhile? Doesn’t auto start-stop drain the car battery? Or more importantly, is it harmful for the engine to make it repeatedly turn off and on, especially in high-traffic situations? Let’s dwell on some of those topics.

Is BMW auto start-stop bad for the engine?

Generally speaking, not at all, unless you don’t adhere to the recommended service schedule and use poor quality oils. Cold start-up is in fact potentially more harmful for the internal engine parts than the auto start-stop. That’s because during a cold start-up the oil is still cold and viscous, therefore has troubles in getting into spots with tight clearances – such as rod bearings. So, as a result, it doesn’t have a chance to quickly pressurize and lubricate the engine’s moving components.

On the other hand, the auto start-stop system doesn’t engage with a cold engine.

Before the function begins to work the engine must achieve operating temperature – to do so, the car uses electric water pumps maintaining optimal engine temperature when the vehicle is at a halt. Or, if the engine is off long enough to have a significant temperature drop, the start-stop automatically turns it on.

When it comes to oil pressure and lubricants, the oiling passages may not be as pumped as in a running vehicle, but they are still not allowed to leave oil into the oil pan. Furthermore, suppliers put polymers on the connecting rod bearings to minimize friction when the oil isn’t pressurized.

Does auto start-stop drain your battery?

You use many of your car’s electronics even on the shortest trips – most of them are powered by your battery. No wonder, then, you’re worried there won’t always be sufficient charge to turn on the engine. Fortunately, your BMW’s computer being an intelligent system oversees such cases. If it estimates that the battery isn’t charged enough to restart the engine, it will not engage the auto start-stop system. Therefore, no – the auto start-stop technology won’t drain your car battery.

What’s more, BMW thought the battery issues through. The company decided to include AGM batteries with higher capacity in start-stop vehicles, as well as enhanced starter motors to cope with the extra demand. Their starter developed by Robert Bosch GmbH can endure an increased number of engine restarts in start-stop cars and make the engine restart quicker.

Need a new car battery? Learn how to replace and register it.

Your BMW battery has drained? Chaz will show you how to charge it.

If you find the auto start-stop function annoying during long idles in traffic jams, you can manually disengage it using the ‘A off’ button on the dashboard. Pressing it will illuminate a LED light indicating that auto start-stop is currently deactivated.

This however won’t disable the auto start-stop permanently. Pushing the button will only switch off the function as long as you don’t turn your car off and on with a key. In case you’re up for a permanent auto start-stop disabling, BMW coding will be necessary.

BimmerTech’s Start-Stop button coding will permanently turn off the automatic engine shut off feature and program your vehicle to remember its most recent settings. This way, whenever you stop your car and hold the brake pedal, your car won’t shut off the engine. To  disable auto start-stop after purchasing the option, you’ll need a coding cable and a scheduled remote coding session with our technician.

What are some other popular BMW coding options? Apple CarPlay activation, Video & Services in motion and Enhanced bluetooth are only a few amongst many. See a full list of the most popular coding options in this blog post.

When does BMW auto start-stop activate?

For the engine to automatically stop and restart, several primary conditions need to be met:

If some of these conditions are not met, the start-stop symbol will appear on your instrument cluster.

To ensure the security of the system, BMW auto start-stop was made to be pretty demanding in terms of the additional conditions that ought to be met when using it.

The reasons why the engine does not auto-stop:

The reasons why the engine does not auto-start:

At times you may notice the auto start-stop restarts your engine despite the fact you haven’t started driving yet. See what may trigger the BMW engine to restart automatically:

Even though the topic of the auto start-stop system raises vivid discussions full of extreme opinions, we hope that this guide helped you to bust some start-stop related myths. If you feel like we didn’t touch an important issue connected to this technology, leave us a comment. We’ll gladly get to know your ideas.