How to retrofit an E-Series BMW? Good question. Many BMW E-Series cars are known to be quite tricky when it comes to upgrading, due to older production dates. But retrofitting them definitely isn't impossible! So for all of you who wonder how to retrofit your BMW E-Series, we’ve prepared a list of retrofits suitable to specific E-Series models.

Here you’re going to learn what your options are, including BMW E-Series aftermarket stereos, BMW iDrive upgrades, BMW map updates, BMW E-Series coding or even adding a BMW CarPlay retrofit. Just search for your BMW Series number and your head unit version, and learn all about the available upgrades for your car. Dig in! What is BMW E-Series?

A bit of history to start with :) BMW E-Series cars first appeared on the market way back in 1968. They carried an E project number (standing for the German ‘Entwicklung’, or in other words ‘development’) ...until the model numbers neared triple digits with the appearance of the E89 - launched in 2009. From this year forward, the E codename was replaced by F numbers for all new-generation BMWs, which in time have changed to G models — currently produced by BMW.

What are the BMW E-Series models?

If you wonder how to distinguish between BMW E-Series cars and F or G-Series vehicles, here’s the whole list of BMW E-Series models to help you identify your car by production year and the different BMW E generations.

Learn which BMW model you have from this blog post.

Before diving into your search for available retrofits, remember to also check what head unit you have. Each upgrade largely depends on the type of head unit, and the tricky part is that each model had several iDrive systems throughout the model run. Is it too much? Let us explain the whole selection of head units that appeared in E-Series BMWs.

Not sure which head unit your car has? Decode your VIN and we’ll send your car specifications in a PDF file straight to your inbox.

The RAD (Radio BMW Professional CD) head unit is a very basic radio head unit utilized for the audio system, telephone and on-board computer. It was used in the following E-Series models:

The BMW M-ASK (MMI Audio System controller) is a limited version of the iDrive computer with a small 6.6" screen. On the US market it can only be found in 5 Series and 6 Series, as well as X5 or X6, without navigation abilities. If you have a European car you may also get it as ‘Business navigation’ in 1 or 3 Series BMWs, where you’ll be able to identify it thanks to its basic navigation features, such as directional arrows or 2D maps.

M-ASK Business navigation was available for these BMWs depending on region:

Just like M-ASK, CHAMP (M-Audio System Controller) is a 2nd generation Business navigation system. It is used for the audio system, telephone, and on-board computer, and offers hands-free calling, playing MP3 files from a USB stick and listening to music through an AUX port.

The BMW CHAMP system was featured in the following E-Series models:

The BMW CCC (Car Communication Computer) is a 2nd generation head unit and a real-time operating system that has an 8.8” display, a DVD drive for DVD based maps, a CD drive and an AUX input. It debuted on the market in 2003 with E60/E61 5 Series BMW, and since then has featured in the following models: 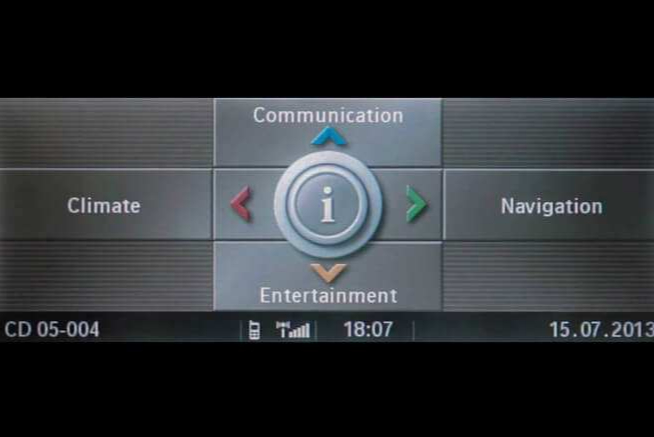 The BMW CIC (Car Information Computer) system is a successor of the CCC head unit, and belongs to the iDrives of the 3rd generation. It appeared in 2008 — replacing the display, computer and the controller of its predecessor — and came with additional features such as: an 80 GB hard disk drive (HDD) and a USB connector in the glove box.

Get to know more features and retrofit possibilities for CIC iDrive. CIC iDrive system has appeared in the following E-Series models:

If you want to know more about BMW head units, read our blog post.

What are the retrofit possibilities with each head unit?

Looking at how advanced each of these head units is, you can already guess that some will get more retrofit opportunities than others. While the basic RAD will only let you replace it with a more functional CIC iDrive system retrofit, head units such as M-ASK, CHAMP or CCC will give you the option of installing Front & Rear View Cameras, SmartView solutions or our VividScreen screen — all due to the presence of on-board computers and factory screens.

But there’s another catch. Not every M-ASK head unit will have the same retrofit opportunities, as it divides into 2 different versions: M-ASK 2 and M-ASK60 — with the latter being a more advanced iDrive that includes support for BimmerTech's MMI module. Having M-ASK60 in your BMW means you can add our MMI-based cameras or SmartView products.

CIC head units, just like M-ASK, divide into versions: CIC/CICM (in F-Series vehicles) and CICR/CICMR (in E-Series vehicles). This doesn't have much actual impact on what retrofits you can add to your BMW. CIC iDrive systems in general have support for the MMI module, which allows adding Front & Rear View Cameras or SmartView devices. Also, thanks to their advanced connectivity features, CIC iDrives make it possible to add Combox Media PnP retrofits, BMW Apps retrofits and Enhanced Bluetooth/USB Activation.

Some E models with CIC will have a Rear View Camera (OEM) available, while others won’t - it has nothing to do with the iDrive version, it’s only due to the presence of PDC and Navigation Professional in given BMW models.

Is your BMW E-Series from before 2002? Or was it produced right after BMW started equipping its cars with iDrive systems? Your model will not be missed. We are going to go through all E-Series cars — from BMW 1 Series to BMW Z4 — and show you what you can do to upgrade them, even just a little.

While more recent E-Series BMWs have optimistic upgrade hopes, those manufactured before 2002 will unfortunately have a hard time with any retrofit. Due to a lack of iDrive system in these cars, it’s impossible to do any major technology upgrade on them. The only thing you can do is a BMW key fob replacement.

If you lose or damage your key fob, you can easily get a new one from BimmerTech. Our replacement key fob comes pre-programmed by the BMW factory, so doesn’t require any additional programming. All you have to do is get it activated and you’re all set.

Need a key fob replacement? Check everything you need to know about BMW key fobs.

BMWs from the E range produced after 2002 already came with iDrive systems, which made it possible to retrofit them with a couple of upgrades. In the table below you’ll be able to check the available retrofits depending on your model’s head unit.

Still not sure which retrofit is available for you?

If you wonder what retrofits would be perfect for your specific BMW model, you still have two other options to find it out:

It’s hard to keep up with BMW's ever-changing technology, especially if your car has 15+ years under its belt. Luckily, with this retrofit your beloved vehicle can level up to the latest the BMW market has to offer.

BMW CIC Navigation System retrofit will let you enjoy the most important tech functionalities of your iDrive — a high definition screen, the latest BMW map update for your region, multimedia features such as Video & Services in motion and Voice Control, as well as some USB coding options that will depend on your vehicle. But the biggest perk of all is the ability to add our CarPlay MMI Prime retrofit to your 2008 or later BMW.

What other features and upgrade options are there in a CIC iDrive retrofit? Check it out in our blog post.

Having CarPlay in your E-Series BMW might have seemed out of the question. Fortunately, at BimmerTech we like a challenge, and we’ve decided to create a CarPlay upgrade for as many vehicles as possible. Our CarPlay MMI Prime retrofit is now available for E & F Series BMWs produced since 2008, including those with CIC iDrive systems.

It’s a true catch for retrofit enthusiasts that truly brings older BMW’s multimedia system up to modern day standards. With CarPlay MMI Prime you can use your favourite iPhone apps, such as Google Maps, Waze, Spotify or WhatsApp, right from the iDrive screen, and control them with your iDrive controller or Siri. Also, thanks to our MMI’s Android Auto support, you can pair up your Android smartphone with the module, or even add Front or Rear View Cameras for a much lower price.

To learn more about your broad possibilities with CarPlay MMI Prime, check out our blog post.

As it turns out, there are more retrofit possibilities for E-Series BMWs than many would think. From a full-on upgrade of the iDrive system, through adding Front or Rear View Cameras and SmartView solutions, to a high-tech CarPlay retrofit — your beloved E-Series car can undergo a modern transformation which will make it compete with the newest vehicles on the market.