BMW iDrive Screen - All you need to Know

BMW iDrive Screen - All you need to Know

Over the last decade or so, more and more of our interaction with our cars has been through a screen on the dashboard. The BMW screen -- the focal point of the iDrive navigation system -- lets you see vehicle information, navigation directions, messages and more. As time has gone on, the list of things you'll find on the iDrive menu has increased, meaning more time spent staring at the dashboard display.

With the BMW iDrive screen being so important to your in-car experience, it's worth getting to know a little more about it. So what types of BMW vivid screens are there? How do you protect and maintain it? And what aftermarket or OEM BMW screen upgrades and navigation screen replacements are available if you need it?

Like the screens on our phones, computers and TVs, BMW improves the screen technology in its central information display with each generation of vehicles. Compared to the screens in older models, today's are larger and sharper, and often feature advanced features, like touchscreen control.

These screen improvements were quick to find their way to BMW's premium models, but enthusiasts of the more mainstream vehicles often had a long wait to enjoy the latest and greatest features.

What size is the navigation screen in a BMW?

The most obvious change to BMW's screens has been the size. The earliest iDrive screens were 6.5" -- roughly the same size as the largest iPhones or Samsung Notes. Making do with a screen the size of a phone had obvious consequences; cramped menus, poky navigation maps and a generally underwhelming experience were hallmarks of the early iDrive experience.

To remedy this, an improved BMW panoramic screen was available with higher-end navigation options. A size bump to 8.8" meant a lot more screen real estate. As these screens also took on a wide-screen aspect ratio, the space could be used more effectively. For example, iDrive split screen options allow using navigation and music side-by-side, for extra convenience. 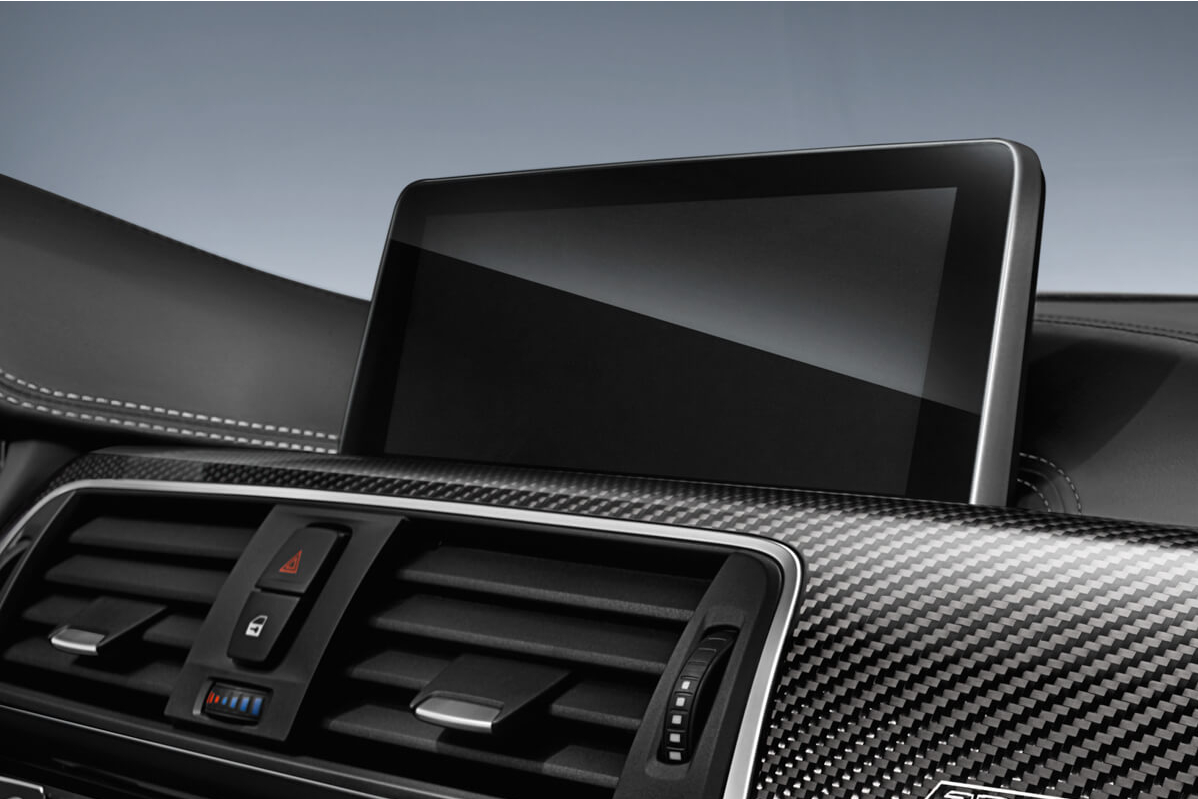 More recently, BMW went on to introduce a larger 10.25" wide-screen display. Though initially reserved only for premium models, in the current generation it can be found in vehicles throughout BMW's catalog. With more screen space than earlier versions, the 10.25" display is popular with people who make heavy use of their iDrive system, including CarPlay, video playback and other features.

The premium place previously occupied by the 10.25" has now been taken up by an even larger 12.3" screen, found in some of the latest vehicles like the G05 X5.

What other BMW screen upgrades have there been?

Beyond just size, there have also been several other improvements to the design of the BMW vivid screen. Some early models, like in the E90 3 Series, were fully enclosed, with a second see-through plastic screen in front of the actual display. This iDrive screen protector prevented damage to the surface of the display, but often made seeing the iDrive interface difficult, as light reflected off the outer screen.

Current-generation iDrive screens are exposed, with a special coating to prevent damage and ensure good visibility in all light conditions. However, that does mean it's important to take good care of the screen, to prevent scratches and other damage.

Even routine maintenance can cause problems if you don't know how to clean the BMW iDrive screen properly. Repeated rubbing with a rough cloth or harsh chemicals can wear away the anti-glare coating or cause scratches. It's important to always use a soft microfiber cloth when wiping your iDrive screen, along with distilled water or high-quality, dedicated screen cleaning solution.

Proper maintenance means not having to figure out how to remove scratches from the BMW navigation screen later on.

Which BMW cars have touch screens?

BMW has also added touchscreen control to its information displays in recent years. Like larger screens, these were first found in high-end models, but have since spread to more mainstream vehicles. Most of the latest generation have touchscreen control either as standard, or as an optional extra.

Which BMW has a flip up screen?

The screens in most modern BMWs stand upright from the top of the dashboard, but BMW has used a few different designs through the years. In many older vehicles, like the E65 7 Series or E60 5 Series, the screen was embedded in the dashboard itself. A small number of vehicles, like the E87 1 Series, even offered a flip up screen that could fold down into the top of the dash.

As more and more features have been added to the iDrive system, making constant access to the screen more important, this design has been phased out.

What year did BMW update its navigation screen?

Which screen you'll have in your vehicle depends not only on what year it's from, but also which model it is and what navigation option you have. Unsurprisingly, luxury models with premium navigation options are going to have bigger screens, and they'll get extra features quicker.

In the 3 Series F30, for example, all vehicles with the basic Business navigation had the smaller 6.5" screen, while vehicles with Professional navigation system had the larger 8.8" screen. The only major change through the model run was the addition of touch screen control for the larger screen starting from the 2018 model year.

By 2018, the 7 Series had already had a touchscreen for two years, along with a larger 10.25" display. A 10.25" non-touchscreen display was also available in the F10 5 Series throughout production, starting in 2010. It would take the launch of the G20 3 Series in 2019 for fans of BMW's more compact model to get the option of a similarly sized screen in their own cars.

What screen size is the BMW NBT Evo?

When retrofitting your BMW with a new iDrive system, it's worth remembering that the screens available to you depend on your model, not the iDrive system you're upgrading to. BimmerTech's  NBT Evo ID5/ID6 retrofit kits come with 8.8" and 10.25" screens, either with or without touchscreen capability. Checking the screen(s) available for your vehicle is easy:

The fact that one iDrive system can potentially include a variety of different screen sizes sometimes means it's possible to upgrade your screen size -- for example from 6.5" to 8.8" -- without changing any other hardware. Our  Panoramic Screen retrofit for BMW F30, as well as our aftermarket  VividScreen upgrade for BMW E6x, E9x and F3x, let you step up your screen size without having to replace your whole iDrive system.

How to replace the BMW iDrive screen

As the internal trim in each model differs, how to change your iDrive screen will depend on your vehicle. However, in general you will only need to remove the air vents below the display to allow access to the screws connecting the screen to the dashboard. With that done, the screen is attached with a simple wiring harness, which can easily be unplugged. Connecting the replacement is just as easy, and requires no soldering or wire cutting. The entire process can be completed in up to an hour.

When replacing your iDrive screen with a larger one, it's important to remember the difference between the aspect ratio of the smaller 6.5" screen and the 8.8" or 10.25" wide-screen display. Without adjusting your iDrive, the picture on the screen will be stretched to fill the wider screen. 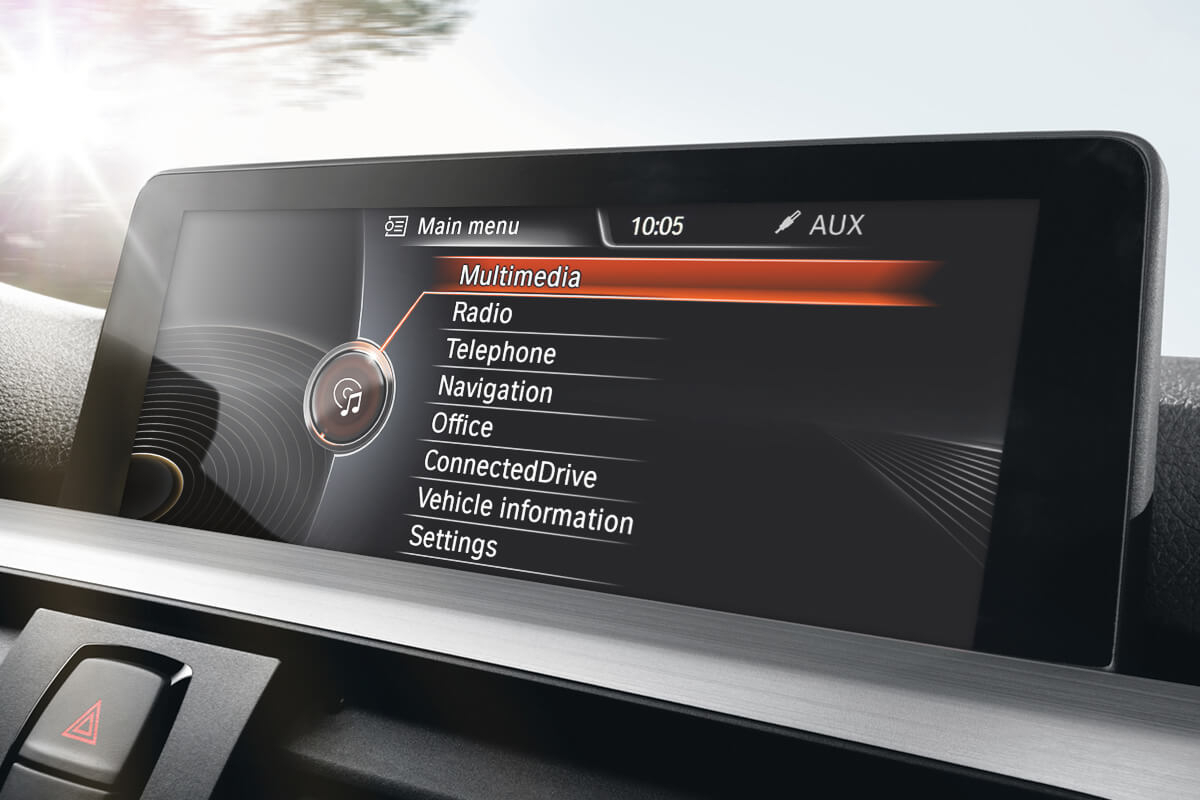 Depending on your vehicle and factory system, it may be possible to code your iDrive to correct the screen resolution and remove stretching. When possible, BimmerTech offers this service with all screen upgrades.

One advantage of having one of the bigger BMW iDrive screens is the possibility to use split-screen mode, to show two different things on the screen at once. For example, you might want your navigation directions on one side, with the current radio station on the other.

One time you might not want to split your screen is when using Apple CarPlay. In vehicles that support it, BMW uses a split-screen CarPlay interface by default, keeping a section on the right of the screen back for the iDrive system.

What this means in reality is just less space for your CarPlay interface, and as CarPlay makes it easy to toggle between navigation, music and messages, you might prefer to go all in on CarPlay.

In many vehicles it's possible to unlock full-screen Apple CarPlay by coding your iDrive, which can be done via USB or in a coding session with a skilled technician. To find out how to code BMW CarPlay full-screen mode and whether it's available for your vehicle, take a look at our  BMW iDrive coding options.

How to display a video on the BMW screen

Coding is a great way to unlock other screen features, too. Activating the USB Video Player option makes it easy to watch videos on your iDrive screen, and with the Video in Motion option, your passengers will even be able to watch as you drive. For business rather than pleasure, you can also switch to showing full text messages on the dashboard display, or your choice from dozens more iDrive options.  Learn more about BMW iDrive coding, and how it can help you put the growing screens in the latest vehicles to good use.

In some BMWs, you can even get videos, messages, navigation and more straight from your Android mobile phone. The Android Screen Mirroring feature lets you cast your phone's display to your iDrive, and get your favorite apps on your BMW dashboard screen. In many of the latest vehicles, it's available as a coding option from BimmerTech, and is just one way to  connect your mobile phone and iDrive system.

Whether you're looking to replace your iDrive screen, upgrade your hardware, or just make a few changes to help you make the most of your dashboard display, our expert team is on hand to help you find the right upgrades and retrofits for you.  Get in touch and we'll be happy to help.